In our previous post about Transportation Policy, Sprocket presented a table to illustrate the potential drastic reduction in funds due to an apparent trend in decreasing miles driven by 16-34 year olds as brought forth by a report issued by the U.S. PIRG Education Fund & Frontier Group.

Here’s an update to the analysis and what it means to you, me, and anyone who uses funding from taxes collected from the sale of gasoline and diesel fuels.

Background: The Federal gasoline tax currently stands at 18.4 cents per gallon and is not indexed to inflation. What that means is that the tax has remained at a constant 18.4 cents over time while its value has decreased due to an increased supply of money in “the system” which dilutes what those cents can buy today.

Inflation is something your tires need when they are flat. As you fill them with air, notice how they expand and seat snugly against the constraint of the rim. What happens when the tire is over inflated beyond its design? If you’re laughing, you already know, but suffice it to say that the tire (or tube if you use those) will overcome the restraint of the rim, usually with a very loud “bang!” and the tire is rapidly deflated. If you’re riding your bike and this happens, the tire could actually roll off the rim, usually leaving the rider with stories of legend if they manage to control the blowout and are able to come to a safe stop.
So that’s inflation in a nutshell, and yes, you could say that over inflation leads to a depression as in the tire is now depressed on de-floor.

Last raised in 1993, the purchasing power of the gas tax (and the money in your wallet or account), has decreased by 33% which means instead of buying 18.4 pieces of bubblegum in 1993, you now receive 12.3. If you want to buy 18.4 pieces of gum but only have 12.3 pennies, you must get a loan for the full amount needed and thus you need an intermediary to supply the loan. The intermediary might be a friend, your dad, or even a banker, who might accept your bike as collateral for the amount they will loan you and for this service, will charge interest in addition to any additional charges for loan origination, insurance, etc. You can see that things become complicated quickly and it is better left to another post as to where (and how) the bank gets the money for its loans.
Bottom line; by going into debt, more money is created thus diluting the purchasing power of the existing money supply.

By the way, there is also a federal tax on diesel fuel which stands at 24.4 cents per gallon.
Thankfully we will limit our discussion to gasoline only in this post.

So What?
Intuitively a decline in miles driven results in less fuel being bought, less taxes collected, thus less funds for transportation issues; of which if we (as a nation) rely on to build and maintain our national, regional, and local transportation infrastructure.

Every year the purchasing power of our currency is slowly eroded causing the cost of anything, including transportation projects to increase. If the increase in costs were matched by the taxes collected there would be no problem. With an increase in costs and a decrease in taxes collected, a gap is created between what is desired and what is available to buy it with. Much like the desire to have 18.4 pieces of gum but only having 12.3 cents to pay for it. The question now becomes: “Where will the money to fill the gap come from?”.

Will the money be borrowed, or will something be sold to raise the difference needed? Should we (as a nation) auction the Grand Canyon, or a another national treasure to the highest bidder?

In this country. a rough average estimate for a paved bike path is $1 million per mile.
The dollars used to build these things come from transportation projects. Are you with me now?

What’s the number?
We don’t have a single number because the study didn’t provide the crucial ingredient; the number of “capita” in their “per capita” figures, thus we provide an updated range of possible numbers. It turns out our previous hypothetical, while correctly pointing to the escalating problem of a funding gap, was way shy of the possible population of drivers used in the study. Also, we updated the table to provide clarity into Federal and State funding gaps. Here is the big picture: 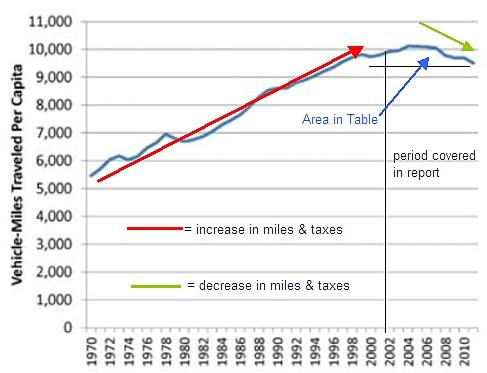 The blue arrow is pointing to the data area expanded in the table below. Since the number of drivers and miles driven in California covered by the report are not known (by us), we used the national average state tax rate of 28.6 cents per gallon to derive:

From the report it’s clear that just a 2400 mile reduction per capita made a huge difference in available funds (taxes) when multiplied by the number of capitas! While the report covered the 8 years from 2001 to 2009, the fact that they chose to study the 16-34 year olds is meaningful for 2 reasons:

Obviously if there were more than 30 million drivers in the age range of 16 to 34 during the period of the study the red ink would be dripping from your monitor onto the floor. While there may have been more, the point has been made, and we aren’t auditors!

Well Then What’s the Point?
What the study dances around, and we present clearly, is that for the 8 years from 2001 to 2009 there’s been a funding gap and now we have an approximate scale to the size of the gap.
The gap has been filled somehow, but at what future cost?

The point is that initial future funding for transportation infrastructure will not only be sharply curtailed, but whatever percentage previously devoted to cycling improvement will come under direct attack or diverted to fill other funding gaps.

That $5 million you thought would build a connecting spur to an existing trail for a commuter link to the bike station at the Metrolink or Amtrak station might vanish into paying interest on loans made, or bonds issued to cover the previous year’s gap.

A showdown is coming between the auto-centric, “Business As Usual” (BAU) crowd who haven’t known anything but constant growth for the last 30 years, and people who see that model as unsustainable and seek out sustainable alternatives such as more class1 and 2 cycle trails, only to find that the funds that were supposed to be available have been diverted into a privatized venture or some other adventure to prop up the decaying status quo.

What About Tomorrow?
Since we only have a greasy rag to clean our shiny Phil Wood hub, the future is not real clear, but we’ll give it a shot anyway.
While we used a generous 25 miles per gallon (mpg) in calculating tax / funding loss in our 1st hypothetical, that is unrealistic going forward, so we will raise it to 30mpg as acknowledgement to the increasing gain in mileage by newer vehicles. Obviously if the average mpg is higher even less gas will be used, creating a bleaker picture for funding. Since we provided a ridiculous range number for drivers 16-34 in our previous table, we’ll stick with it, and while gas taxes will probably rise in the near future, and forever, for comparison’s sake we’ll leave them as is.
With all other things remaining equal, we change the model thusly:

Presenting Tomorrow
One of our possible futures look like this: 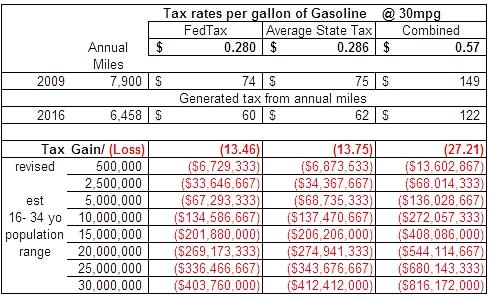 This is a rough (ok, very rough) outlook towards the future in which we are
sounding the alarm now in order to better prepare to create a better sustainable future that we can be proud to leave to our children.

Current trends of driving less while cycling more places an increasing demand for additional cycling infrastructure that might not even exist in some places.  How will it be funded?  More to come later.

We in Orange County have been fortunate to have had forward looking leaders and advocates leading us to where we are today.

We ride in the shadows of those that have made it possible to enjoy where we live and ride today.

It is up to each of us to create the best of all possible futures to carry forward for those that follow us tomorrow.

Probably the best reward would be to have a grand-kid look up and say, “Thanks”.
-Sprocket