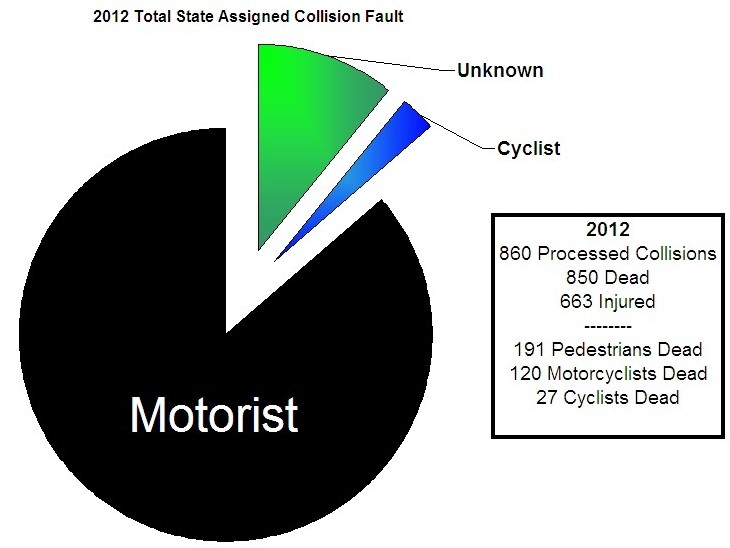 Looking eerily similar to a favorite arcade game of days gone by, the above graphic is created from “current” traffic collision reports from the CHP’s SWITRs database. We use “current” (in quotes) because there is a severe lag between data recovery (from the field)  and data dissemination (to the public). Not reflected in the “current” data are at least 3 cyclist collisions in Corona Del Mar, and the recent tragic cyclist death in Huntington Beach, so these numbers have nowhere to go but up. Unless something drastic happens, the final story of 2012 collision data will be told in 2014.  While the severe data lag may be a post for another day, the data we have now is what we have to work with. 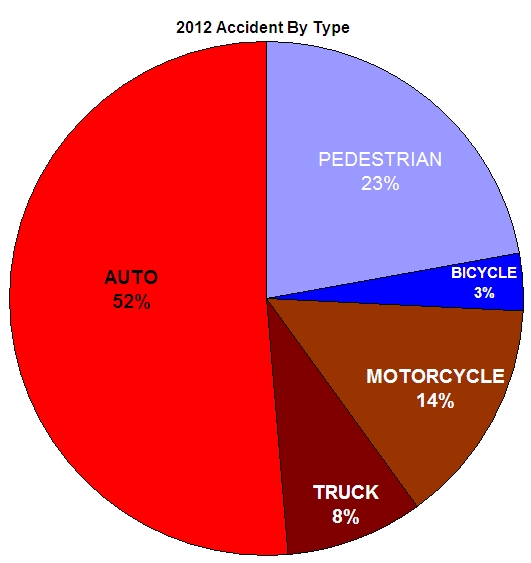 Motorized vehicles account for 74% of accidents statewide so far, while pedestrians and cyclists make up the remaining 26%.

Yes, there are even cyclist on pedestrian collisions as well!

What is clear from the two graphics is that the cyclist population  is responsible for, and involved in the minority of collisions statewide.

Unfortunately cyclists pay the highest price through their bad choice in causing an accident, or through no fault of their own, being laid waste at the hands of another. 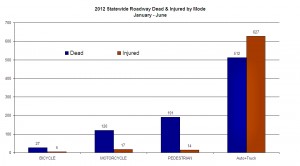 This chart shows the statewide injury and fatality count for the respective mode share of the roadways.

Cyclists seem to fare better than other road users, but everything is relative. Since the population of each mode type is undefined, we calculated the injury / fatality rate for each mode by dividing each into the total for each mode share as seen in the following table:

While the numbers and graphs are based on preliminary data, and paint a very broad brush, they do serve as a foundation for the year going forward.  As we back-fill previous year’s preliminary data with the final releases, trends should be spotted and compared to “current” data to provide a measure of improvements (or not) of cyclist infrastructure and cyclist behaviors that result in injury and death.

We can do this from a county, city, or street corner level (and will if need be) but the data is not current enough to spot alarming trends and place mitigation efforts in place before things get out of hand.

It was Dana Point that took quick action when cyclists and joggers were killed on PCH in 06-07, by installing the k-rails you see today. Since then, there have been no fatalities recorded in the city, and I hope I don’t jinx the city by writing that!

What’s wrong with these pictures? (click each to enlarge) 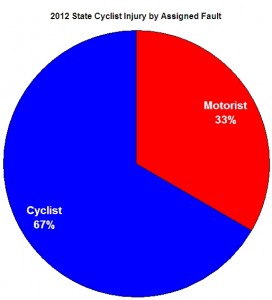 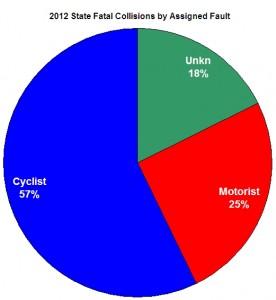 Why are cyclists at fault in the majority of cyclist collisions resulting in injury and death?

Who would willingly sacrifice themselves by causing an accident?

The obvious answer is no rational  person would willingly turn in front of a 2 ton speeding bullet, but the unaware, or unknowing might.

We are all travelers on life’s highway, some on motorized vehicles, and others under their own power.

Neither vehicle is more special than the other, and each operator is very special to someone