Last July 10th,  the City Council of Newport Beach voted 5-1 for sharrows in Corona Del Mar. While it’s been a long time coming, don’t look for them appearing soon, because despite funding being available to “get ‘er done”, according to Mayor Nancy Gardner, ““They aren’t going on the ground tomorrow. We have education to do so we don’t have culture shock to motorists.”

A proper buffered bike lane on PCH in San Diego: 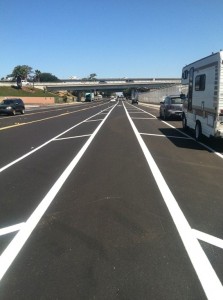 The dissenting vote was cast by Councilman Steve Rosansky, and Councilmember Leslie Daigle was absent. Many people spoke at the meeting in support of  putting paint on the road through Corona del Mar.

However, the Corona del Mar Residents Association (CdMRA) wants sharrows delayed until other traffic problems such as cyclists on sidewalks, and other issues are addressed and taken care of.  In fact, the headline in the 7/10/12 Corona del Mar Today reads: “CdMRA to Mayor: Make CdM Streets Safer Before Adding Sharrows“.

We hasten to state the obvious that adding sharrows is designed to make streets safer for everyone, and will probably remove the need for cyclists on the sidewalks as well, so the sooner the paint is on the pavement the better.

Great coverage in Corona Del Mar Today from 7/10, and some comments are chillingly hilarious if they’re meant to be funny;  indictable if serious.

We’ll post the scheduled  painting / “installation” when it is available, and we thank the City Council of Newport Beach and the Bicycle Safety Committee for advancing road safety in Newport Beach.

In the meantime here are some additional pictures of what is and what could be:

Rumor has it that we might see sharrows in be October.