If you’re in the area…

There are angels…Looking at the forlorn cup with the single flower and the sagging bouquet nestled in the shrubs, I felt there must be more – and a man appeared from nowhere with 3 balloons and asked if I knew her. We tied the balloons onto a sturdy branch next to the bouquet and he was gone. Deep in thought again I heard a car behind me stop and a strong male voice shouted out,”God bless your friend bro!” and he was gone. And so is she, and I am left wondering why.

Update 9/15/12: According to Sgt. Mark Hamilton, “The identity of the victim is still unknown at this time. Anyone with information or who witnessed the collision is urged to call the Newport Beach Police Department Traffic Division at 949-644-3742″. If anyone is missing a loved one that was riding a blue bike with white tape and saddle in the Newport area, and they haven’t returned home yet,  please contact the NPBPD.

Update: 16 cycle collisions since 2002 occurred, but this poor rider has the distinction of being the first fatality at this intersection. Fault for the other collisions were 8 for the cyclists, 6 for the motorists, and 2 that were “unknown”. Although there is a sliver of a bike lane in the right hand portion as you come off the bridge, it would be pure conjecture on our part as to what may have happened. The pictures from the accident scene are at the OC Register here.

Update: added map of the location, as we await full statement from Sgt. Mark Hamilton of the NPBPD. Although what is known is that both parties were eastbound and the truck was making a right turn onto Bayside, the police are still taking witness statements and investigating the cause of the collision. The driver of the truck (as yet un-named) remained at the scene.

Breaking – Details are still sketchy but what we do know as we learn from this quick article in the Corona del Mar Today:

A truck struck and killed a bicyclist about 10:35 a.m. today at Bayside Drive and East Coast Highway, a fire official confirmed. 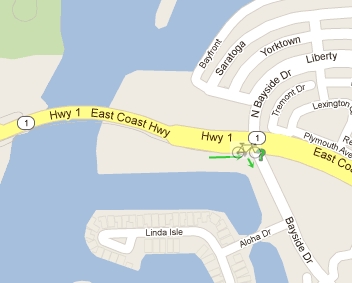 The woman, who was not immediately identified, was in her 20s or 30s, said Newport Beach Battalion Chief Jeff Boyles. She was riding eastbound on Coast Highway when a stake bed truck hit and ran over her, he said.

Prayers for the family and friends of the rider…RIP

Update: From Sgt. Mark Hamilton, “at about 0719 a.m., a 40-year-old female driver turning right onto PCH from N/B Jamboree Road collided with a 75-year-old male pedestrian near the S/E corner of that intersection. The female driver remained at the scene. The pedestrian was transported to Mission Hospital with moderate injuries. Traffic Investigators are currently conducting an investigation as to the cause of the collision. Anyone with information or who witnessed the collision is urged to call the Newport Beach Police Department Traffic Division at 949-644-3742. ”

A few hours earlier, a car struck a pedestrian at East Coast Highway and Jamboree Road. The victim was in a crosswalk when struck, Boyles said. The victim was taken to Western Medical Center in Santa Ana.

Best healing wishes to the survivor.

Updates will be provided as we receive them.