Are donuts good for the diet?
When speaking about roadways the answer appears to be yes. Of course, in this case donuts refers to roundabouts such as we see in Orange or Irvine.
When seen from above, roundabouts look like donuts placed at intersections.

Roundabouts are different than traffic circles in that there no signals or controls. Traffic in the circle has priority, or the right of way over traffic entering the circle forcing drivers to slow down and enter the circle as gaps in existing traffic permits. Because there are no traffic controls the flow is continuous, resulting in increasing the traffic throughput through the intersection.

Properly designed roundabouts don’t allow for tangential entries. All entries point to the center of the roundabout forcing vehicles to decrease their speed to navigate to the right, although some modern designs have flared entries by adding a lane for increased capacity. Pedestrian safety is improved by routing separate crosswalks away from the intersection so they only have to deal with traffic in one direction at a time.

The problem for traffic/ transportation engineers is maintaining the flow-rate to areas downstream of the roundabout so  a shift in congestion (and resulting delays) does not occur.

Roundabouts or gyratories were designed in 1877 by the Architect for the City of Paris, Eugène Hénard. In 1907 the Place de l’Etoile became the first French gyratory, followed by several others in the city. American architect William Phelps Eno designed New York City’s Columbus Circle which was built in 1905. The main difference in the two men’s designs lay in the diameter of the center island. Hénard favored an island of at least 8 meters (26 feet), while Eno favored a smaller diameter. Perhaps it is from here that we have the “Portland” and “Seattle” designs of today.  Regardless, the United States favored traffic circles and rotaries being controlled by signal devices for the rapidly growing automobile population which resulted in such traffic tie-ups that they fell out of favor by the 1950s.

Land values also contributed to the demise of circular intersections because eliminating land consumed by the safer free flowing roundabouts, or signalized traffic circles, meant that buildings could be built with greater density and greater profit.

Today and the Future

After recently taking a look at the intersection of Bayside and PCH, and every intersection along the way to Laguna Beach, the question arises, “could what was old become new again”? Therefore as a thought experiment we present the following ” 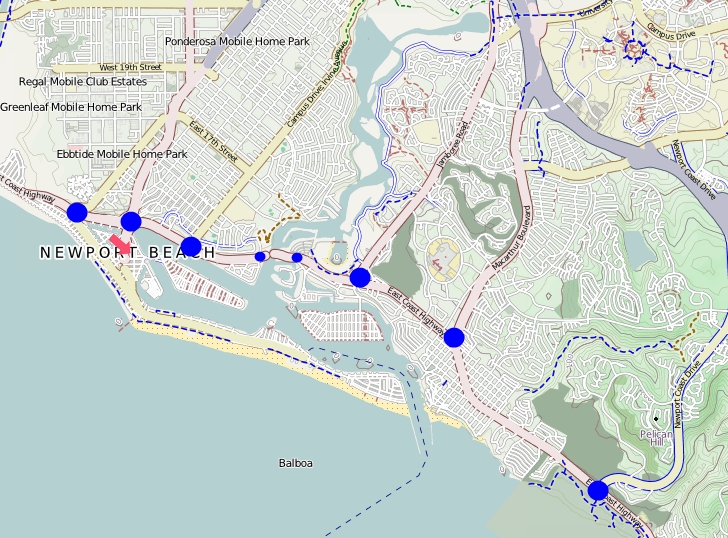 Each blue dot represents an appropriately designed and implemented roundabout built to the highest safety standards and Complete Streets guidelines. Traffic would flow smoothly to and from the coast as well as up and down through Newport Beach, making this area not only a pleasure to travel through (as in commuting) but a pleasure to travel to (as in tourists).

Since this area was bought from the state by the City of Newport Beach, we suggest a serious consideration be made by city planners in their five year planning strategy to accommodate greater numbers of roadway users while increasing their safety on the City’s roads.

While we don’t have the hard numbers, some savings will result from decreased costs of city response to collisions, and elimination of electrical signals and their associated maintenance. With minimal reconfiguration of existing infrastructure, we are confident of the merits of this design. Maybe in a future post we’ll put up some soft numbers to quantify the potential return.

And there you have it, a brief introduction of roundabouts which if applied properly, will serve the County and City well in reducing speed, reducing air pollution, increasing traffic throughput, and most importantly increasing roadway safety for all road users far into the future.