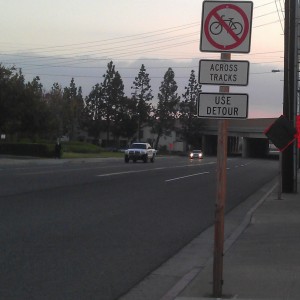 It’s a simple idea: an agency responsible for a road construction project can ban all road users from the construction site, detouring traffic to an alternate route, but it cannot single out one mode of road users for that ban.

But that was OCTA’s approach to traffic management through the Placentia Ave. railroad grade separation project until recently.

Bicycle Coalition Board Member, Brian Cox, regularly commutes this route and objected to the ban. His lengthy correspondence and a phone call from fellow Board Member and attorney, Rock Kendall, affected a change.

OCTA spokesperson, Terisa Oliveri, replied, “we concur with you and the signs will be removed or bagged”

Why is this defense of cyclists’ rights important?

As another OCBC Board Member, Brian DeSousa, puts it, ” if OCTA is given a free pass to close a road to bicyclists during construction, then they will always do that as a cop-out, rather than spending the effort needed to accommodate bicyclists through the work zone.  The [standards in California’s design manual] tells them how they can do that.”

Complete Streets doctrine requires cities to consider all users, including bicyclists, when planning their streets and highways.  Many cities are slow to comply with this new legal requirement and it’s up to all of us to hold them to it. But the idea of bicyclists being fully vested road users has been state law for decades. Your right to bicycle on public roadways is protected by California Vehicle Code, which permits bicycle ban only on freeways and some expressway. 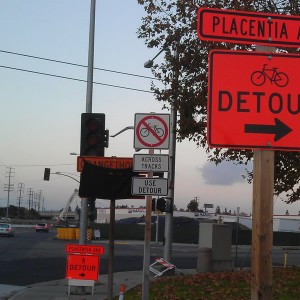 As Brian DeSousa further points out:

a. Attorney General’s opinion: 52 Ops.Cal.Atty.Gen. 313, 314 (1970) cited Wilton v. Henkin(1942), 52 Cal.App.2nd 368, 372 which affirmed the superiority of state legislation for traffic regulation over local ordinances.
b. The court in Flury v. Beeskau (1934) 33 P.2nd 1033, 1036, 139 Cal.App. 398, stated that “A bicycle or motorcycle is recognized as a legitimate means of traveling upon the highways or streets of a city either for business or pleasure. The traffic rules which are prescribed by the California Vehicle Act apply to bicycles and motorcycles as well as to automobiles and other vehicles.”

Since [Placentia] is neither a Freeway nor an Expressway per CVC 21960 and the city has no other express authority to regulate cycling as required by CVC 21, the sign is in conflict with the CVC and is unenforceable, and discourages lawful cycling per the CVC.”

What’s a reasonable detour? And why can’t the site be made safe for cyclists?

OCTA’s proposed bicycle detour routes bicyclists onto State College and Chapman Avenues before returning them to Placentia. Seriously? Not only are the streets more heavily traveled, Chapman involves freeway on and off ramp traffic and their corresponding traffic signal phases.

Why can’t the diversion through the construction site accommodate bicycles? The answer is, it could– provided OCTA engineers designed it that way. They are in charge of the width and curve radius of the lanes through the site. They can read state design standards as well as anyone. And they could have accommodated bicyclists through the site if they cared enough to do so. OCTA engineers are too eager, in our opinion, to ignore Complete Streets concepts and the fact that signs and stripes are not in place– to this date–, to warn motorists of the presence of bicyclists, is proof of that.