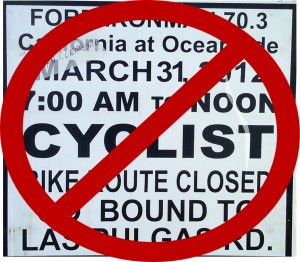 Let us know if you see any signs like this in Oceanside or San Clemente. Ironman says you can Detour on your way.

This year you can expect to find helpful course marshals providing safe access for bicyclists using the I-5 corridor between Orange and San Diego Counties during the annual half-Ironman race, Saturday March 29.

The race has grown in size and in recent years Ironman has obtained permission from Caltrans and the Marines for exclusive use of old Hwy 101, the one and only connection between Oceanside and San Clemente. Ironman isn’t the only entity that usurps bicycle access on the old road; the Marines close it several times a year for maneuvers. And when this happens Caltrans routinely opens the I-5 freeway shoulders and post signs to provide safe bicycle passage north and southbound.

But Ironman went one step further: they prevailed on Caltrans to close those ramps for the “safety” of their racers. That was a cold and clueless move by an organization which likes to cast itself as bicycle friendly. And that closure violates state law which requires Caltrans to maintain non-motorized access between points whenever they turn an existing road into a freeway.*

OCBC has worked with Caltrans Districts 11 (San Diego) and 12 (OC) the last two years to get them to do the right thing. Preparing to file an injunction against Caltrans permit finally got all parties’ attention.

So if you’ve ever wanted to ride a freeway with impunity, Saturday, March 29 from 7AM to Noon, between San Clemente and Oceanside will provide a dandy opportunity.