Wednesday, May 20, 2015 at 6:30pm
3 Orange County locations:
City of Irvine City Hall in Irvine, California
San Clemente to Dana Point
Third Location
Join bicyclists across America who take time to remember fellow riders killed or injured on the nation’s highways. A slow easy ride in silence with opportunity to gather socially at the end. Please join us.
For more information, Sellin.com/silence

Sunday, November 17, Newport Beach — Riders from around Orange County turned out to mourn the death and celebrate the life of Irvine cyclist, Paul Lin, 41. The pace was reserved and tears were shed when the ride reached the scene of the collision, San Joaquin and Marguerite, in Corona del Mar.

A ghost bike marks the intersection now, a reminder we hope to motorists that cyclists are present even when they’ve forgotten us. 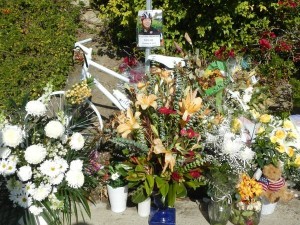 Flowers and a ghost bike in Memory of Paul Lin at the intersection of San Joaquin and Marguerite, Corona del Mar. 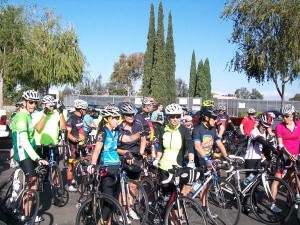 Riders from various clubs and the Robert’s Cycling Meetup Group came together to cycle in memory of Paul Lin.

A separate Memorial Fund is established in Paul’s memory. If you would like to contribute please use the button, below. Funds will be used for education and on-going advocacy so that we may reduce cyclist death and injury in Orange County.

Bicyclists have been drawn to Newport Beach and Corona del Mar since the streets were rutted dirt. As the towns have grown so has the attraction: the ocean, Pacific Coast Highway, challenging climbs and hilltop views. But more than in surrounding towns cars, high speed roads, and a sense of driver entitlement makes Newport Beach more dangerous for cyclists and pedestrians. It’s as if the needs of human beings on the street matter less than those of drivers; people in Newport Beach have a “right to life, liberty, and the pursuit of happiness” only in their cars.

Does human life mean less than the convenience of motorists?

That’s a serious question. It’s being asked nationwide these days and, believe it or not, there is debate. One need only read the comments which follow stories in LA Times, New York Times, The Economist and elsewhere. Irate drivers are quick to say that cyclists suffer pain and death because, essentially, we dare invade their precious turf. Rude, dangerous behavior, they claim, is only tit for tat. A two second delay to avoid a sideswipe or pause to allow a cyclist to exit an intersection is too much to ask in a culture dominated by auto advertising and the promise of a better life only a better car can provide.

“Around here, you’ve got to love what you drive,” says Fletcher Jones. Apparently you don’t have to love anything– or anyone– else. 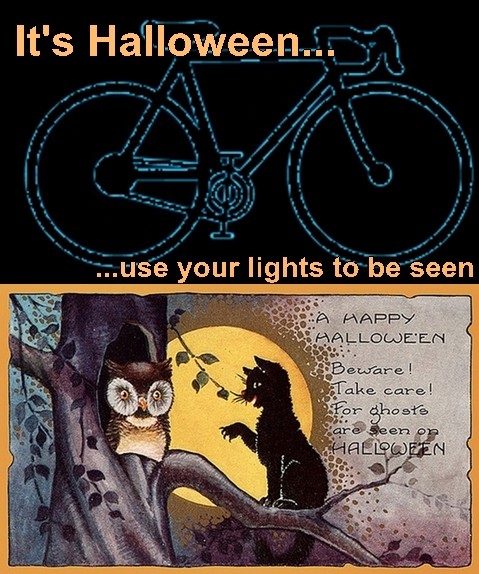 A safety reminder for all the trick or treating ghosts and goblins, and everyone else – if you use your bike after the sun goes down be sure you have front and rear working lights on so you can see and be seen.

Remember to stay on the right side of the road and reflective clothing doesn’t hurt!

Look both ways before crossing an intersection or even crossing the street, we want you here – tomorrow.