The Aliso Creek Regional Riding and Hiking Trial was recognized by the U.S. Secretary of Interior as an exemplary local and regional trail as part of America’s national system of trails.

The dedication event was held on 10/18/12, and was well attended by local officials, county staff and hiking and biking enthusiasts of the trail with the highlight being the unveiling of the National Trail marker.
Thanks to Bill, our reporter in the field for providing pix from the event: 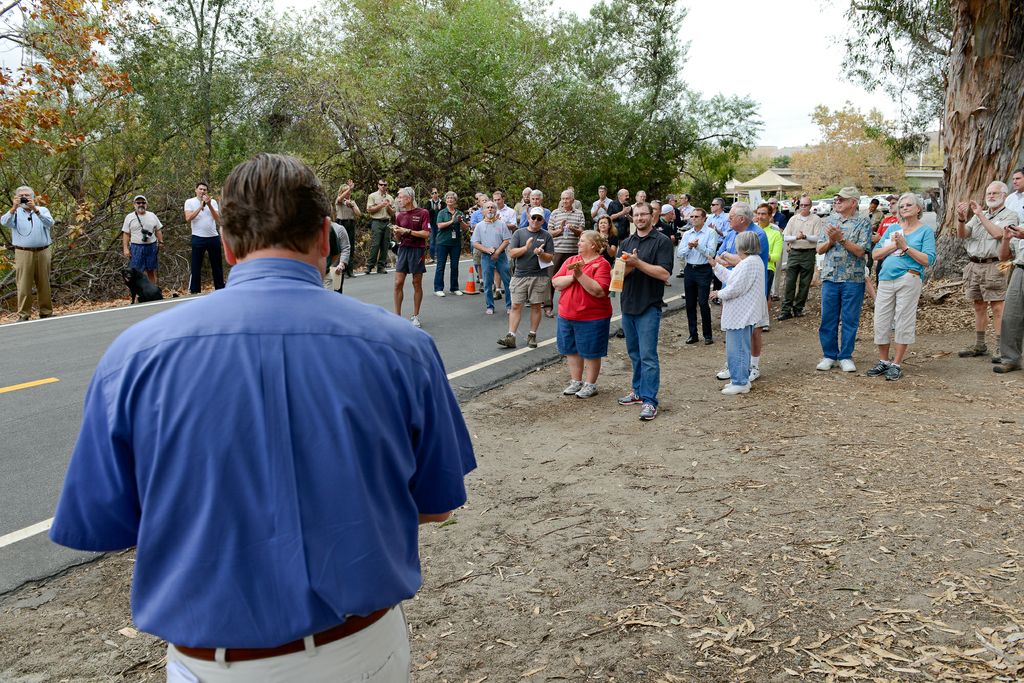 Great Turnout on the Trail

Thanks to Alicia Raish of OCParks for providing the above photo taken by Chad Yanagisawa, and spearheading the recognition of the trail as a National treasure.

Currently, the Aliso Creek Regional Trail has 15 miles of asphalt bikeway, and soft trail designed for varied recreational activities including hiking, bicycling, walking, running, birdwatching and horseback riding.  The soft trail is better suited to hikers, runners, horseback riding, and generally slower traffic. It runs for much of the length of the creek on the opposite bank, and there are plans to extend it the full length of the creek.

The trail links six schools, a community church, two skate parks, and ten community parks together and offers a wide variety of geography throughout its length from hard concrete channelized infrastructure to tranquil settings that soothe the soul.

The trail traverses five south county cities, extending from the foothills of Orange County near Cooks Corner, past the McFadden Ranch House, and follows Aliso Creek downstream all the way to the boundary of Laguna Beach within a few miles of Aliso Beach in South Laguna.

Moulton, Muirlands, Irvine / Trabuco, Portola, and Santiago Canyon / El Toro are great routes to link to this trail which is an integral link in the OC BikeBone.

A voluntary recall Due to Fall and Injury Hazards.

Consumers should stop using recalled products immediately unless otherwise instructed. It is illegal to resell or attempt to resell a recalled consumer product.

See pictures of all the affected models at the CPSC recall announcement page here.

While not taking place in the OC, there will be a conference in Long Beach that might be of interest.

Taking place at the Long Beach Convention Center and at the Promenade, the Pro Walk/Pro Bike 2012  conference runs from 9/10-9/13 and will cover 100 presentations on six major themes such as:

There is a note on the site that standard registration ends 8/10, but whether prices go up or down from that date is unknown at this time.

In addition to the above, the League of American Bicyclists and the Association of Pedestrian and Bicycle Professionals in partnership with Women on Bikes SoCal and Pro Walk Pro Bike, will be hosting the National Women’s Bicycling Summit starting at 2pm when the PW/PB 2012 conference concludes.

After the Summit, continue to network at the Cycle Chic Fashion Show and after-party. Prices for the Conferences, Summit, and Show are listed at the respective sites but range from $15 — $595.

After attending the events, join the Orange County Bicycle Coalition to leverage your newly honed skills and increased knowledge into quick positive action in your community and county.