Sleeping in caused our rookie reporter to arrive at the bike expo just as it was being taken down. 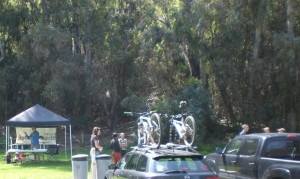 Starting at 06:00, the racers were done by 08:30 and since our reporter arrived well after ten almost everyone had gone on to enjoy the rest of Cinco (or Drinko if you prefer) de Mayo.
Reportedly there were no injuries to the riders but 1 frame got cracked on the course.

Disappointed that everything was being wrapped up, he interviewed Mike from SpokeGrenade about the company’s new 1,000 lumen bike light which would be illegal in most of Europe, but perfect for lighting up the wilderness as you cruise through over here . With about 3 hours battery life taking about 5-6 hours for full charge, this lightweight and weatherproofed light appears small but packs a big punch.
Warning: Do not look directly into the light beam!

How often do you get to see the Pacific Coast Highway closed to traffic for a bicycle Event? Well, at least the southbound-side was in Dana Point yesterday for the DPGPofC!

As I was taking the snaps, a car went around the road block and went south (in the northbound lane for a short while) and was soon chased down in hot pursuit by DPPD’s finest.

Kudos to the organizers and the City of Dana Point for routing motor powered traffic around the venue!  For cyclists, it was great (outside of the errant driver or two) experiencing a traffic free Coast Highway. yay!

I’m sure the racers also enjoyed a much better line coming onto Del Prado without worrying about hitting the fence and being distracted by occupants as motor traffic slowly made their way through town next to the race course.

I arrived just in time to see some serious minded racers entering the turn, who seemed to get faster after each lap.

But enough about racers, we were here to see cycling!

Soon enough, here they came, your next generation’s road warriors hurtling down the straights of Del Prado!

Walking our bike throughout the venue, we were pleasantly surprised to see an instructional cycle course for the youngsters. If there’s anything the OC needs, it’s better cyclist education about the rules of the road, and the sooner the better.

Walking around the venue, I met Fernando from Cycleogical about bikes, life, and the meaning of space and time. Good stuff!

Later, around town we spotted this vehicle which is Cory Clayton’s latest service vehicle from his OC Bike Garage & Service.

At the former Revo shop, we spotted this sign of future coming attractions.

Just a block away (across from Hennesey’s) is another new shop!  Cycleogical has a 4 man mountain bike team that you can follow on Strava and participate in shop rides from the store.

I talked with Melissa about bread and farmer’s markets, and met Bill who showed off his awesome Ibis mountain bike.

Hungry now, I went back to the venue to take part of the various calories offered and, oh yeah, some guy named Brad Huff won the Elite Mens category for the 2nd year in a row(!); full details here.

The SoCal Woodies club gather for the opening of Doheny Wood at Doheny State Beach
in Dana Point.
The Official event will be held on April 14th from 8 AM to 3 PM, but be aware of extra traffic and people in the campground as they set up on the 13th.

On the 14th, if you want to go south or north through the park –
you will probably have to walk your bike where the cars are being displayed.
Typically they set up at the south end of the parking lot which isn’t too bad if
you’re coming north – but if you’re heading south – skip the park (unless you
want to see some old woodies) and continue on PCH to rejoin the protected
bikepath at Palisades / Beach. Water and restrooms are available at Beach about 200 yards SW of the RR crossing.