How many riders have traveled through the Pacific Coast Trail without a thought about the stretch from Oceanside to San Clemente?  Specifically the old highway 101 bike trail that runs from Cristianitos Rd in San Clemente to Basilone Rd. Hundreds of surfers, pedestrians, and cyclists who take the paved trail to Trestles daily also take it for granted. But the paved trail next to the Christianitos on-ramp was hard won by Pete Penseyres years before he won the Race Across America.

Showing that one person can make a significant difference, here in his own words is how it came to be. 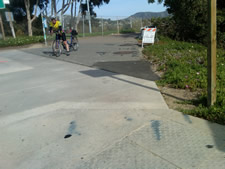 All roads lead to Trestles, if you’re heading south from San Clemente.

“I was commuting to San Onofre from Dana Point in about 1973/4 and entering Camp Pendleton daily at Cristianitos to ride down a dirt road over the river bed (sometimes dry, sometimes flooded) and back up to Basilone. I had to sign a waiver each time and carry it with me, but couldn’t use it again. I contacted CalTrans and asked them it they had any plans to connect the old Highway 101 bridge and abandoned roadway to Cristianitos and Basilone for cyclists. They said no. Then I asked them to open the freeway shoulder between those 2 locations. They said no. Then one day I was riding on the dirt road with one of my co-workers when a speeding Marine MP came at us around a blind turn while joyriding by fishtailing his truck on the dirt road. He just happened to be fishtailing away from us as he went by, but that was the last time my co-worker rode his bike to work and the last time I used that road. I called CalTrans again to ask that they open the freeway shoulder until they got around to connecting Old Hwy 101. They said no.

So, although I avoided civil disobedience in my 2 years at Berkeley, I became a deliberate repeat offender of the CVC. The first ticket I got was on a rainy day overlooking the dirt road and the river crossing. The CHP officer refused to turn around and look at the alternate route to the freeway shoulder. Then I sent a subpoena to the CalTrans District Director to be at the Courtroom to explain why they closed the freeway in violation of their own procedures when they cut off bicycle access between San Clemente and points south. They came to Laguna Niguel to see who this crazy guy was that was causing them so much grief, but the court appearance was moved to Vista, because the ticket was issued in SD County (by the length of the off ramp).

I sent them another subpoena and got a call from the Director’s underling asking for him to be excused because he had a vacation planned for Europe. I said no. Then he said, “Why don’t you just drive?”

They got the subpoena quashed and sent a young engineer instead. In the meantime, I was continuing my civil disobedience and the CHP made a game of citing me on most nights when they apparently discovered my schedule and didn’t have anything better to do. It never got to the point that they had the tickets ready, but I did manage to collect 25 or so of them before my court date. There were a number of different CHP officers involved and most or all showed up in Vista. In the meantime, I contacted John Forrester and he agreed to help me with my defense, bringing with him the CalTrans procedure they violated. I brought in photos of the road (taken from the freeway shoulder) and the shoulder from one exit to the other. I submitted everything into evidence before a chain smoking judge who had to call periodic recesses to light up in his chambers. We agreed that not every one of the CHP officers had to identify me as the criminal and agreed that I was riding on the freeway shoulder so they could go back to work. I think they were disappointed not to be able to stay. When we questioned the CalTrans engineer, he read the procedure CalTrans was supposed to follow and agreed that they had not considered opening the freeway shoulder. At that, the judge called for a lunch break and we thought things were going pretty well. When the judge returned, he immediately asked us to enter his chambers, lit up, and explained that he was going to find me guilty. When I said I would appeal, he offered to write the “Statement of Facts” that we could use for my appeal. John thought that was nice, but when the Facts came out, there was no mention of the CalTrans engineer admitting that they hadn’t followed their procedure.

When I complained to the judge in a letter, he replied that he did not recall that part and we could just use that information in the appeal. The appeals court simply confined their judgement “within the 4 walls of the Statement of Facts” and let the verdict stand on a 2-1 vote. I had to pay a $25 fine and was on probation for a year to stay off the freeway, or else. Meanwhile CalTrans finally got motivated to complete the short extensions at either end of Old Highway 101 and everyone lived happily ever after…”
Pete Penseyres 2012