To promote bicycling as an everyday means of transportation and recreation.

Commuting and recreational bicyclists formed the Orange County Bicycle Coalition (OCBC) in 1991 to promote bicycling as an everyday means of transportation and recreation.

OCBC is explicitly authorized to represent about 2000 Orange County bicyclists who are members of member clubs. Beyond that, we speak for all bicyclists, including the poor, the elderly, and children, and for the bicycle industry.

In 1994, OCBC obtained tax-exempt status under section 501(c)(3) of the Internal Revenue code, and has retained that status ever since.

The OCBC seeks to “promote” bicycling. A necessary component is advocacy, protecting the state-granted rights of bicyclists. Since its founding, the OCBC has successfully corrected many government infringements of these rights by schools, cities, the county and state.

In 1996, Rock was a newly-minted attorney and avid cyclist. He was invited to join the OCBC by founder Don Harvey, PhD, JD, and other board members as they eventually prevailed against a city that had unlawfully closed a crucial road to bicyclists only.

Excerpts from an effective demand letter:

Respectfully, “safety concerns” is insufficient. It is simply not a lawful reason to thwart the intent and plain meaning of both long-standing California statutes and case law, just some of which is touched upon below. If you have case law or statutory authority contrary to our citations below, please advise.

“A person riding a bicycle…upon a highway has all the rights….” California Vehicle Code Section 21200(a)(1). (Emphasis added.)

“[L]ocalities have no carte blanche and, absent express authority, may not determine which traffic shall and which shall not use streets.” Rumford v. City of Berkeley (1982) 31 Cal. 3d 545, 544. (Emphasis added.)

Dan Hazard (Huntington Beach) Dan has advocated for bicycle and pedestrian safety for 15 years. As a co-founder of the City of Huntington Beach Bicycle and Pedestrian Committee, he urged the mayor to apply for League of American Bicyclists bike-friendly status, resulting in a bronze award. Dan then planted the seed with the Orange County Transportation Authority, which also earned a bronze rating. When riding, Dan often stops to thank and compliment municipal workers, then sometimes sneaks in a safety improvement request. In his jersey are clippers Dan uses to improve dangerous “line of site” foliage issues, earning him the moniker “Yankee Clipper” – a nod to his New England roots. In early 2021, Dan joined the OCBC Board of Directors on the Infrastructure Committee and has planted more seeds to build stronger ties with cities like Huntington Beach. His focus has been on Class II streets and Class I concerns for the popular multi-modal Huntington Beach beach path. 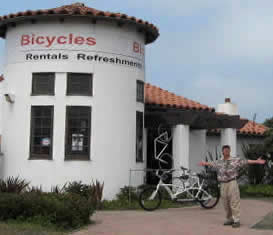 For 16 years, long before he became Executive Director of Orange County Bicycle Coalition, Pete van Nuys would look at the unused Metrolink building at the north end of town and wonder, “When is someone going to put a bicycle rental business in there?” Last December he posed that question to the San Clemente City Manger, who passed it on to the Community Development Director, who sent him a key, and what would become a loooong list of things to do and people to see, not to mention contracts to sign. And in May he got the nod. Every flavor of Gatorade this is. Many coats of paint later this building is welcoming cyclists with cold drinks, energy snacks and, oh yes, ice cream.

Also tubes, tires, tools, mirrors, seat packs, locks…. the stuff you need but sometimes forget on your way down to Las Pulgas.