You’ve probably heard the above, that when you ride your bike on the street you have the same rights and responsibilities as a “driver.” But why? And exactly what does that mean?

Your Right to Ride

League of American Wheelmen rally, 1880. The League was the world’s first road user association and lobbied for America’s first Good Roads Campaign. It was the model for all Auto Clubs that came after it.

California’s streets and roads are not for cars. They are for people. They existed before the automobile and are in the fullest sense, public. Historically people walked, went “astride a horse,” or drove a team of horses from a wagon, and as a result today we still “ride” bicycles and motorcycles, and “drive” 4-wheeled vehicles.

Well into the 20th century courts upheld a person’s right to travel on public roadways existed regardless of the mode they chose– walk, ride, or drive, it was all the same. But in 1913 California drivers found their right revoked, and ever since they’ve had to have a license to use the public roadway. No such license has ever been required to bicycle.

In the 19-teens automobile use exploded and by the 20s cars were clearly dominant. And it was equally clear both roads and the law would have to grow to accommodate them. In 1935 all rules pertaining to car use were combined in the first version of the California Vehicle Code, or CVC, which was recodified and expanded in 1959.  Revisions and amendments are on-going.

Early in the writing bicycles were defined as human powered “devices,” distinct from “vehicles,” a term understood to apply only to motor vehicles. Nevertheless, CVC Section 21200 acknowledges your right to the road:

But You Must Obey the Rules

“Subject to all the provisions…” means simply that all behaviors required of drivers of cars are also required of you when you bicycle. These behaviors clearly have to be 1.) physically possible and, 2.) not otherwise prohibited by law. You’re not required to get your bicycle smog checked, for instance.

But common sense and the CVC require bicyclists to ride in ways consistent with other road users:

A bicycle operated on a roadway, or the shoulder of a highway, shall be operated in the same direction as vehicles are required to be driven upon the roadway.

3.) signaling when we leave that line to turn at an intersection or merge across lanes

4.) to yield to other road users who have the right of way, and

5.) to adjust our position on the road according to our speed.

This last point is based on simple courtesy and is required of all slow moving traffic. CVC 21654:

So car obsessed did the legislature become, that this same language was repeated in a section directed exclusively at bicyclists, CVC 21202: 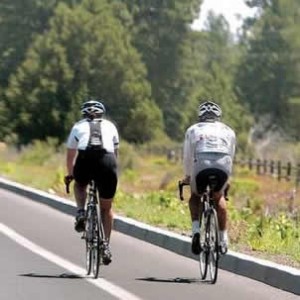 In the bike lane? Yes. But are they as far to the right as “practicable?” See our Graduate Degree in Bicycle Law.

(a)Any person operating a bicycle upon a roadway at a speed less than the normal speed of traffic moving in the same direction at that time shall ride as close as practicable to the right-hand curb or edge of the roadway except under any of the following situations:

(1) When overtaking and passing another bicycle or vehicle proceeding in the same direction.

(2) When preparing for a left turn at an intersection or into a private road or driveway.

(3) When reasonably necessary to avoid conditions (including, but not limited to, fixed or moving objects, vehicles, bicycles, pedestrians, animals, surface hazards, or substandard width lanes) that make it unsafe to continue… For purposes of this section, a “substandard width lane” is a lane that is too narrow for a bicycle and a vehicle to travel safely side by side within the lane.

(4) When approaching a place where a right turn is authorized.

(b) Any person operating a bicycle upon a roadway of a highway, which highway carries traffic in one direction only and has two or more marked traffic lanes, may ride as near the left-hand curb or edge of that roadway as practicable.

This section and the doctrine behind it is referred to by bike advocates as “Far To the Right” or FTR, and as Alan Wachtel points out in Bicycles and the Law:

As long ago as 1975, the California Statewide Bicycle Committee… found this law “has caused more confusion and frustration among motorists, bicyclists and law enforcement agencies than any other bicycle section in the California Vehicle Code. It is apparent that interpretation and enforcement of this section by local police agencies is not uniform throughout the state.” Many bicyclists would agree that this situation continues to hold true today.

Most of the confusion lies with the four exceptions within the section which you can read, above. These allow you to leave the right hand position
* to pass a bicycle or motor vehicle
* to make a left turn
* to avoid hazards in your path, and
* wherever cars may likely turn right.

You alone must decide if these conditions exist because you alone are ultimately responsible for your safety. Similarly– and this is where the trouble lies– it is the police officer alone who determines whether or not you get a ticket. At that point it becomes a judge’s job to decide.

Bike Lanes are Not for Your Safety

In the 1970s American experienced the Bike Boom when hundreds of thousands of bicycles were sold and “overnight” in use on our roads. In the college town of Davis the campus was expanded from an agricultural school to a full fledged University of California, and amidst this growth two professors– inspired by the bicycle paths and culture they admired in Holland– promoted the idea of a bicycle friendly environment.

The results included the nation’s first bike lanes, including various experimental designs. The town’s leaders, perplexed by the growth of bicycles on their city streets, embraced the bike lanes as a means to keep cyclists out of the way of cars. Caltrans engineers, still busy with the state’s mandate to expand our freeway network, embraced this aspect of bike lanes to accommodate the ever burgeoning car population. So again, the slow moving vehicle mantra is repeated in CVC 21208:

(a) Whenever a bicycle lane has been established on a roadway… any person operating a bicycle upon the roadway at a speed less than the normal speed of traffic moving in the same direction at that time shall ride within the bicycle lane, except that the person may move out of the lane under any of the following situations:

(2) When preparing for a left turn at an intersection or into a private road or driveway.

(3) When reasonably necessary to leave the bicycle lane to avoid debris or other hazardous conditions.

(4) When approaching a place where a right turn is authorized.

(b) No person operating a bicycle shall leave a bicycle lane until the movement can be made with reasonable safety and then only after giving an appropriate signal in the manner provided in Chapter 6 (commencing with Section 22100) in the event that any vehicle may be affected by the movement.

Though perceived by the general public as a safety feature, experienced cyclists often refer to these lanes as “bicycle jail.”  They are a place to store cyclists out of the way of motorists, but only so long as the lane’s existence is convenient for local engineers or affordable to taxpayers– lanes appear and disappear without rhyme or reason and early lanes often ran cyclists into bridge abutments, curbs, or simply off the road.

But notice the 4 “get out of jail free cards” are the same exceptions as for Far To the Right (21202). Unlike FTR, however, Section (b) requires the same signaling as for any vehicle changing lanes: merging left only when safe to do so, and signaling left when the merge would affect traffic already in the left lane.

Motorists are required to make right hand turns from the bike lane.

That’s right, though most motorists have forgotten this fact CVC 22100 clearly states:

And page 34 further instructs them to pass cyclists without “squeezing them off the road.”

And the Driver’s Handbook further instructs motorists, “To make a right turn, drive close to the right edge of the road. If there is a bike lane, drive into the bike lane no more than 200 feet before the turn. Watch for bicyclists or motorcyclists who may get between your vehicle and the curb.”

That is why the bike lane stripe is dashed approaching intersections. You, the bicyclist, are supposed to move left out of the bike lane if you are going straight through. This helps you avoid the dangerous “Right Hook” when a motorist guns past you, then jams the brakes to turn right in front of you.  As a general rule, do not pass any motorist on the right; look for traffic behind you, merge left when it’s safe, and pass cars on their left.

Today America is having another Bike Boom. Whether it’s as big as forty years ago remains to be seen, but it is happening amid greater realization of the many benefits bicycling provides– not just for the natural world, but for the livability of our cities and health of our citizens.

Bicycle policy is set at the city level, however. And despite state and federal guidelines to encourage bicycle use, police and traffic engineers are set in their car-centric ways. And local city councils, influenced by car-centric voters, are often slow to approve bicycle friendly policies.

Still, bicycles and cars can coexist on Orange County roads. Common courtesy allows this, and when seen and accepted simply as slow moving vehicles, bicycles mix seamlessly with motor traffic.

Can riders legally ride side by side?

Generally yes, provided they are not impeding traffic. Different states have different rules which makes things confusing when riding out of state.  Here is a map showing what is permitted by state from the article Two by Two by Bob Mionske who explains the definitions, and covers the subject in depth.