Pete Penseyres didn’t start out to be an ultra-marathon hero. Aside from a sojourn up Mt. Baldy as a teen, he used his Schwinn Varsity to get to school and through his evening paper route. When he got his driver’s license, the bike was put away– typical for a kid growing up in Ontario, California, in the 1960s. In 1971, however, while living in Dana Point, he and his wife Joanne rediscovered cycling. Avid dirt bikers, they were chased off their motorcycles and out of the surrounding hills by increasingly zealous ranch security. A new bicycle club, Ciclistas Capistrano was forming, and Pete bought two new 10-speeds so they could seek new adventures on what were then Orange County’s rural roads. “We rode to eat,” says Pete. “It was a very social club. We had a coach, Bob Potter, and some of us started racing, but most of the members were recreational riders. We called them ‘tourists’ then. Our club was the first to adopt bicycle helmets when Bell gave us prototypes of the original Bell Biker to test.”In 1973, the first gas shortage hit. Price controls limited the quantity of gasoline the oil companies were willing to produce, and odd-even day rationing began. Gas stations were closed on Sundays, traffic was light, and the bicycling was great. Pete, a mechanical engineer at Edison’s San Onofre Nuclear plant, started riding the 13 miles to work. “I started riding two days a week, then three. It was great to ride by everyone sitting in those long gas lines thinking, ‘These people got up an hour earlier so they could buy gas. And they’ll still be in line by the time I get to work’.”

Commuting wasn’t the reason Pete started cycling, but it became a lifestyle. Soon he was cycling every day. “I stopped driving my ’58 Chevy and from 1972 to 1991 it was unregistered and just sat in the garage.”

A temporary transfer to Chicago allowed Pete and Joanne to ride around seeing the sights; the Brookfield Zoo, the Elroy Sparta trail, and Green County in Wisconsin.

Pete also attended conferences and seminars around the country, and using a little vacation time, would go exploring with his family on self contained camping tours before or after his obligations. 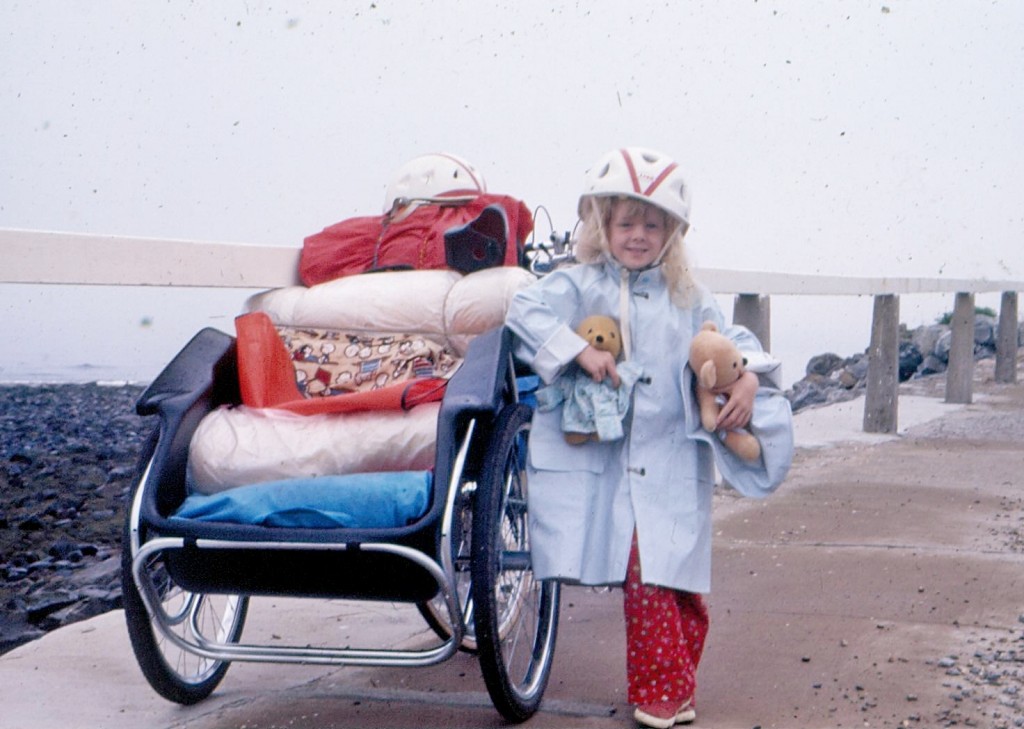 In the late 70s, the family returned to California and Pete continued his daily commute.
In 1978, as the couple drove their ’56 Volkswagen to the Grand Canyon for a rim-to-rim backpack, Pete made a life-changing decision. “I was reading John Marino’s story in Bicycling magazine. He had just set a trans-continental time of 13 days, and I said ‘I have to ride across the country.'”
That summer Schwinn was sponsoring a cross-country record attempt and two tandem teams would be formed to set it. Pete knew he had to be aboard. He contacted friend and fellow racer, Rob Templin, who worked for Adventure 16 in San Diego–and Rob had had the same epiphany! Two ultra-marathon cycling careers were thus launched simultaneously.

Burley Tandem Stage Race Combined age 90+ category. "We were off the front and won that stage -Rob checking the gap to the chasers as we were flying downhill toward the finish."

The above picture shows Pete and Rob in their ‘stars ‘n stripes’ jerseys which they earned for winning the US National Championships shortly before this stage race event.

Pete’s commute habits gave him a natural advantage over competitors who had to fit training around their car commutes. “Every hour you spend in your car is wasted. But if you ride every day the training is automatic, your base is taken care of,” he says.

In ’79, he was reassigned to Edison’s Rosemead headquarters and Pete tried riding 120 miles daily from Dana Point. “Too much!” he says. The couple moved to Huntington Beach and the round trip shortened to 65 miles.

Through the mid 80s Pete ranked among the world’s greatest endurance riders: Lon Haldeman, John Marino, John Howard, Michael Shermer, Jock Boyer, to name a few. ” Not all the RAAM racers rode to their jobs, but the most successful people did,” he says. 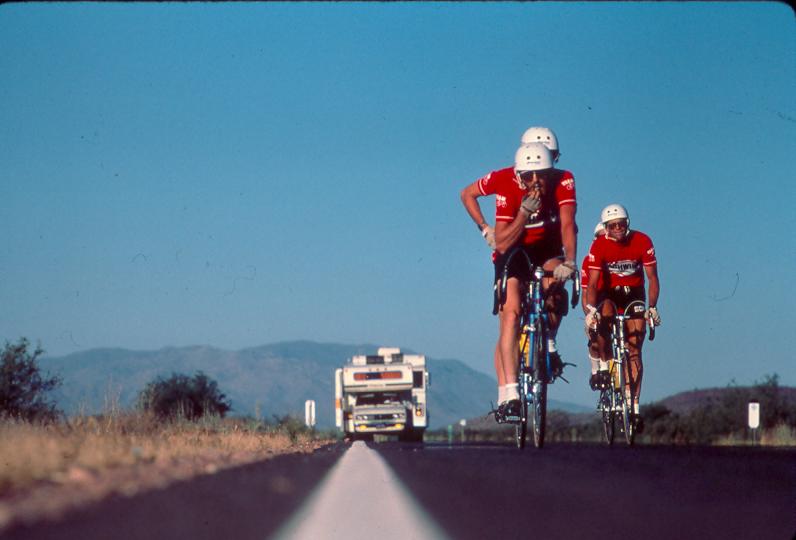 Pete won the Race Across America in 1984 and again in 1986, riding 3,107 miles from Huntington Beach to Atlantic City in 8 days, 9 hours, 47 minutes. His average transcontinental speed record of 15.4 m.p.h. still stands today. Will his record stand against RAAM 2012? Today you’ll still find Pete riding in every RAAM start in Oceanside. 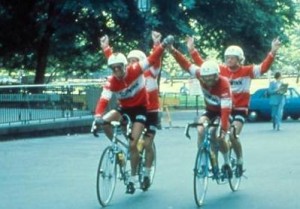 However, his greatest satisfaction now comes from opening others to the rewards of a cycling lifestyle. He and committed volunteers formed the Oceanside Bicycle Committee which, led to the city’s recognition as a League of American Bicyclists “Bicycle Friendly City.” It’s still the only town in San Diego County so recognized.

A League of American Bicyclists Certified Instructor since 2008, he teaches monthly Traffic Skills 101 classes through the San Diego County Bicycle Coalition, cycling 30 miles roundtrip from his hilltop home in Fallbrook, his panniers loaded with books and material for each class. Soft-spoken despite his accomplishments most of his students have no idea they’re learning from one of America’s cycling legends.