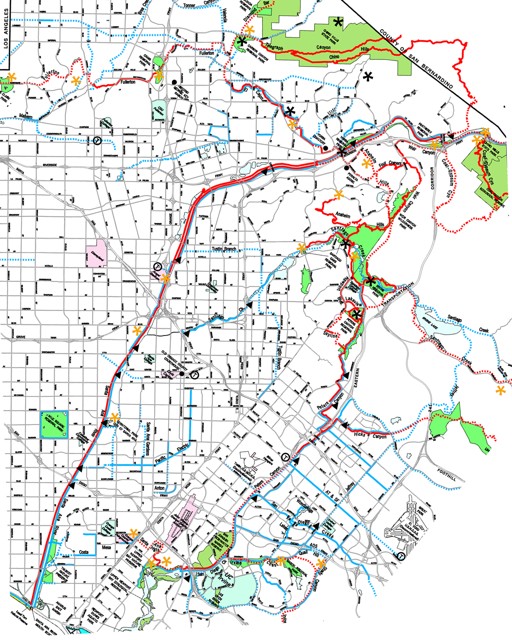 Since the 1970s, the Santa Ana River Trail, or SART, has been OC’s largest single bicycling amenity– not counting our roads themselves, that is.

Background Originally just the service road along the Santa Ana River levy, the route was designated for cyclists when Caltrans transformed Santa Ana Canyon Road into a  freeway.

By posting the 91 against bicycles, Caltrans would have eliminated the historic connection between Orange, Riverside, and San Bernardino Counties. Cyclists protested and streets and Highways Code 888 was enacted to prevent severing  established rights of way because of this very event. (Note: Anyone with historic background to share centering around this decision and the SART, please comment.)

The Good and the Bad

From Day 1 bicyclists embraced the river trail’s utility. It quickly became our “bicycle freeway,” an appealing alternative to north/south arterials as far west as Beach Blvd. The surface was generally decent. And underpasses at all the intersections made it superior to even Irvine’s “bike paths,” which frequently cross surface streets at grade. This feature meant no red lights, ever. As a commuter route the SART did more to encourage transportation cycling than any other facility in the county.

Over the years city, county, and Army Corp agencies have all had an impact on SART. At some point segments of the route came under Parks and Recreation jurisdiction. Their ordinance 2-5-43 requires bicycles be operated safe and reasonable speeds, but under no circumstances at speed greater than 10 MPH. That regulation may make sense on meandering park paths where casual recreational riders mix with baby joggers, but it makes no sense on a route traditionally used primarily by bicyclists traveling from Point A to Point B.

A 10 MPH limit completely destroys the transportation utility of the bicycle.

It’s an unreasonable imposition in an era when city and county agencies are trying to encourage bicycling as a transportation mode. OCBC is working with the county’s Regional Recreational Trail Committee, who generally oppose the 10 MPH limit on SART, and consultants involved in trail and park improvements in the Green River project area, to influence OC Parks to revise their ordinance to recognize the needs of bicyclists on the Santa Ana River Trail.