8/18/12: In response to Julie’s:  Petition for Safe Bike Lanes in Laguna Beach, we sent one of our intrepid riders to illustrate and document the riding conditions from Dana Point to mid-town Laguna and back. His report is here with lots of pictures and standard everyday situations.

Additionally, the OC Bike Coalition is preparing additional documentation and suggested recommendations that will be posted here when complete.

Please sign the petition! Although petitions to Laguna Beach have been tried before, Complete Streets was not the law then. Now that it is, there’s a strong motivator for city councils to not only comply with the law, but to look good by addressing the concerns of their citizens while doing it – a twofer; and re-electable material to boot – a three-fer!

The Impossible has happened. Laguna Beach is thinking about bicycles. 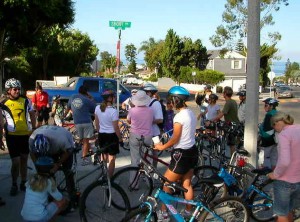 Not your typical Critical Massers: Laguna’s ride is family friendly and kid approved.

It has finally dawned on someone in city government that perhaps the best interests of residents and merchants alike aren’t served by pumping as many cars as possible through every street in town.

Credit the awakening to Les Miklosy, Chair of the city’s newly formed Complete Streets Task Force. Les has promoted the very mellow Critical Mass rides in Laguna since 2008, an organization that has soft pedaled the benefits of cycling into the hearts of city officials.

The city has even proclaimed May 17-21, Laguna Bike to Work Week. A growing number of merchants are offering free coffee to bike commuters who show up on their bikes ready for a cup’a Joe.  So far Laguna Coffee Co. and Heidelberg Deli have ponied up- let’s support these guys with muffin buy!

You can email Les Miklosy here.