9/25/12: Thanks to a traffic collision by a cyclist running a stop sign, traffic enforcement will be stepped up throughout the city, but especially along the signed bike route through town.

9/11/12: The San Juan Capistrano trail (Camino De Los Mares trail entrance) and the Forster Ranch Ridgeline Trail will remain closed through Sept. 20. Thanks to the patch.

8/30/12: The Draft Bicycle and Pedestrian Master Plan (BPMP) is now available for public review.  The Draft includes goals, policies, programs and design standards promoting safe walking and bicycling. Once adopted, the BPMP will be used to implement the transportation and environmental sustainability goals of the San Clemente General Plan.

The Planning Commission is tentatively scheduled to review the Draft at their Wednesday, October 3, 2012 meeting at City Hall, 100 Avenida Presidio, at 6 p.m.

Download the Draft (pdf) here, and its Appendices here.

Your comments and concerns should be sent to:

Show your support for the future of San Clemente by reviewing the plan, sending your feedback to Cliff and Jeff, and attending the 9/12/12 meeting with fellow supporters from PEDal, and the OC Bicycle Coalition.

No longer the sleepy village by the sea.

As San Clemente approaches its Centennial this one time little village now hosts over 60,000 residents. It’s not your typical OC beach town, but resides on rolling coastal bluff tops which offer bicycle challenges of their own.

This year a bicycle and pedestrian advocacy group, PEDal, was formed to lead San Clemente into the human powered 21st Century. Chaired by Brenda Miller, this citizens committee is represented on both the city’s General Plan Advisory Committee and the Bicycle Pedestrian Master Plan committee.

Chief accomplishment so far: winning from the City Council that the the Bicycle and Pedestrian Master Plan will be adopted into the General Plan– key wording. If the plan were “accepted” or “approved” it would not have the effect of law; when “adopted” it becomes part of the city’s General Plan and cannot be easily dismissed by officials planning future projects. 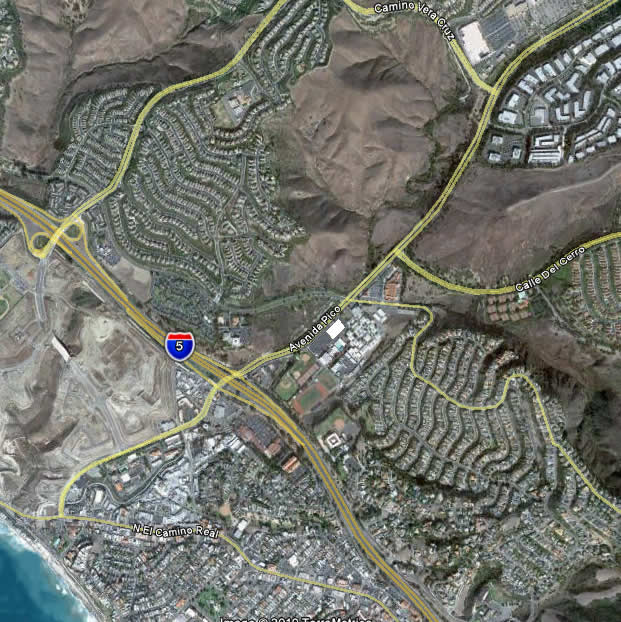 The Pico Corridor and improvements to the Pico/El Camino Real (PCH) intersection is now being discussed. In addition to planned widening of the I-5 bridge to accommodate bike lanes scheduled for 2013, a new shared use path, a.k.a. “Class 1” bike trail is being studied, to parallel Pico from Vera Cruz to North Beach.

Running primarily in the channel of the Deschecha Segunda creek, tunneling will be needed under the I-5 and Pico. Proponents are inspired by the efforts of Los Angeles advocates to naturalize the LA River.