Tustin is an old OC city with a cool restored downtown and a ton of issues.

July 21- Jamboree is complete. The surface is excellent. Life goes on.

But the danger created by callus city engineers and sloppy construction foremen continues. Now we hear improper, unapproved signage on Newport encourages motorists to rage against cyclists not on their separated bike path.

There is NO mandatory side path law in California and cities can never legally prevent bikes from proper use of the streets or roads.

April 13 – For bikes the latest issue involves two months’ of construction and repaving on Jamboree Rd. From Tustin Ranch Rd. north beyond the city limit one lane in each direction, plus the bike lane, will be ripped up. The work is needed and will be appreciated by bicyclists and motorists alike when done.

But the construction zone was laid out with no regard for the thousands of cyclists who use Jamboree weekly. Motorists feel entitled to drive 50 mph even though the it’s clearly marked Construction, 35 MPH. The uphill grade slows cyclist to single digits in both directions. When the lane is too narrow to allow high speed traffic to pass safely state law allows– encourages, in fact– cyclists to occupy the full lane. 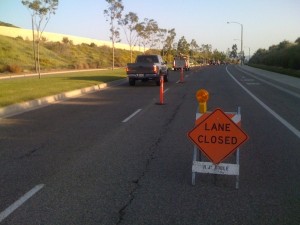 Looking south on Jamboree, approaching the Tustin city limit at the top of the hill. 55 MPH traffic squeezes past cyclists riding 9 MPH-- engineers can leave us more room. 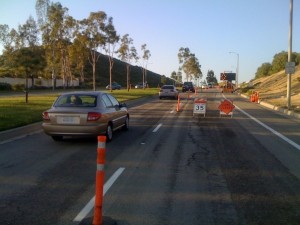 Looking north on Jamboree, approaching the Orange city limit. The site is now crowded with heavy equipment and the righthand lane has been ground away, leaving a 6" drop off where bicyclists ride.

This frustrates motorists no end!

Frustrated drivers blame the bicyclists. But it’s the engineers who are at fault. They could lay out their work to allow us 16″ to 24″ of shy space– enough to give drivers room to pass. Instead the city cynically suggests we use “alternate routes” without even providing Bike Detour signs.

Had problems or close calls with this situation? Help us: Blow the Whistle on It.

Want to vent directly to staff at the city of Tustin: http://www.tustinca.org/departments/pubworks/index.html