You are never too young or old to make a positive difference in the world. 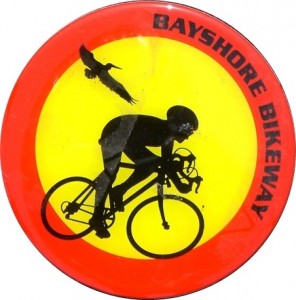 A young man in San Diego had a love affair with tennis until bursitis in his back terminated the affair when he was 50 years old. Looking for something to fill the void,  he used his son’s 10-speed bike and never looked back.

Gordy Shields is a founding member of the San Diego County Bicycle Coalition (SDCBC), which hosts their annual Bike the Bay fundraiser, and is an original member and former ten year chairman of the Bicycle-Pedestrian Advisory Committee of the San Diego Association of Governments (SANDAG). Gordy is also a member of San Diego Cyclo-Vets, one of the country’s most successful masters cycling clubs. He holds the national time trial records for 3 age groups: 80-84, 85-89 and 90-older, in addition to numerous Senior Olympics medals and national championships.

Perhaps outside of racing circles, Gordy is best known for advocating for the Bayshore Bikeway (originally called the Bay Route Bikeway), a planned 5 city, 24-mile route around San Diego Bay, which Gordy has championed since its inception in the 1970s. Slowly but surely over the years sections of the Bikeway were stitched around the San Diego Bay providing cyclists uninterrupted riding on rare flat ground. As the Bikeway took shape, the question of how to safely cross the Sweetwater River came to the fore. Gordy lobbied hard, enlisting the aid of other advocates and the cycling / pedestrian community and a bridge was built to carry pedestrians and cyclists safely across the river. Thanks to his tireless efforts in getting sections of the Bikeway built and connected by the bridge,  the bridge is named in his honor as you will see by the signage.  Earlier this year another section of the Bikeway was completed and Gordy was there to say a few words and assist in “officially” opening the section of the Bikeway. Read the full write up here and the announcement here.

With 14 miles of the Bikeway built, the other 10 miles currently rely on street sections designated as either bicycle lanes or bicycle routes.  Gordy joked that he hoped he’d live long enough to see the Bikeway fully completed.

If you ride the Bike The Bay, or are just out cruising you might catch a glimpse of Gordy as he still rides, and wins!

Be sure to thank him if you see him!

Gordy is an inspiration because despite loosing his first love (tennis) , he found a second (biking) and through his sharing of his cycling passion, enhances the quality of life for all San Diegans and its visitors through the Bayshore Bikeway project, and the races he competes. With tenacity and perseverance and determination, with a dash of humor Gordy gets things done.