The Bicycle Tree in Santa Ana is a volunteer-powered nonprofit that helps bicyclists fix their own bikes, teaches bike repair, advocates for bike-friendly infrastructure and donates bikes to those in need. Sadly, the pandemic forced them to close for two weeks, and now they are open under a new system.

Despite their best efforts, their expenses are currently exceeding their income, and they need help more than ever. Will you please Make a Donation? 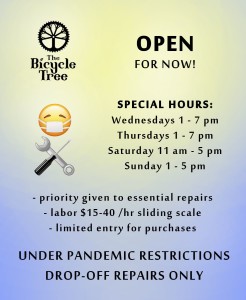 The popular bike lane on southbound Seal Beach Blvd is closed for a few hundred feet near Adolfo Lopez. That intersection is about halfway between Westminster Blvd and PCH, near the police station. Work will finish about December 24.

There are “Share the Road” signs in the area, but riders who aren’t in the mood to “share” with 50+mph traffic can turn west on Westminster, then take the San Gabriel River Trail or PCH south toward Seal Beach or beyond.

The northbound bike lane is open. The right-hand turn lane onto Adolfo Lopez will be lengthened and upgrades will be made to the traffic signal system at that intersection.

For probably the first time ever, Buena Park will have a community workshop about bike facilities:

Please attend and spread the word!

More information and a survey HERE.

Update (May 3): Some Orange County Parks Commission meetings have been cancelled, and now the next meeting on this issue is on May 21. OC Public Works will hear public input on a plan to bypass Peter’s Canyon with Class 2 bike lanes. OCBC will attend the meeting and present serious concerns with these plans. Get the latest news on the OCBC Facebook page.

The County of Orange is ignoring the Master Plan of Bikeways and abandoning completion of the “Mountains to the Sea” Regional Class 1 Bikeway from Upper Newport Bay to Irvine Park.

This off-street Class 1 Bikeway has been on the County plans since the early 1970s. In keeping with that plan, Tustin has built a great bikeway and trail to the south end of Peters Canyon, and Orange has built a three lane multi-use side path from Irvine Park to the north end of Peters Canyon. Without a Class 1 Bikeway through Peters Canyon Regional Park there will be a gaping hole in what could be a great path from the mountains of Orange County to the sea.

In refusing to complete the missing segment through Peters Canyon Regional Park the County is denying access to cyclists, skaters, runners, wheelchair users, parents with baby strollers and people with mobility challenges from accessing a regional park that by definition should be serving ALL citizens of Orange County. The Parks Commission is proposing to bypass Peters Canyon and put everyone off the existing Master Planned Class I Bikeway corridor onto Class II bike lanes alongside steep, busy roadways UP Pioneer & over the summit of Jamboree on a widened side walk.

County staff will present this plan to the OC Parks Commission with an agenda to recommend it to the Board of Supervisors for final action. They have held several ‘workshops’ focused largely on local residents who oppose any change in ‘their’ park. County staff has not asked anyone at other Regional Parks, much less any cyclists who actually use the Regional Parks Connector Bikeway, for their input.

The Orange County Bicycle Coalition is working to see the the Regional Parks Connector Bikeway between Tustin and Orange completed.

We have been at this issue for years, and the NIMBYs are winning. We NEED cyclists and other bikeway users to support our efforts so everyone who uses the “Mountains to the Sea” bikeway will not be dumped onto steep street traffic. We will post regular updates on this website as well on the OCBC Facebook page.

The Mission of the Orange County Bicycle Coalition is to promote bicycling as an everyday means of transportation and recreation. Join the OCBC Today!