Go to the Orange County Ride of Silence website or the Facebook event page for more information.

A new concept to Orange County, known as a Bicycle Boulevard or Bike-friendly Street, is slated for a 2 week trial run on East Wilshire Ave from Pomona to Acacia in the fall of 2015. The IBI Group, under a grant funded contract with Fullerton, will be testing a new street design intended to improve bicyclist and pedestrian safety. The design will allow bicyclists and cars to share the street at speeds of 10-15 mph while enhancing the neighborhood with a calmer and quieter street.

Temporary “traffic calming” and “traffic diversion” devices will be selected from a standard set of tools that have been permanently installed in cities such as Berkeley (10 years), San Luis Obispo (5 years), and now Long Beach. A traffic circle could replace a four-way stop. A raised “slow-movement” intersection that puts the road at sidewalk level where the streets meet, would place pedestrians at a higher level of visibility when crossing the street.

Traffic diversions at entrances, such as Raymond or Lemon, or at key points along the route would allow bicyclists and pedestrians to pass through while diverting larger vehicles to signalized intersections. Limiting through traffic encourages automobile drivers to utilize faster, non-residential parallel streets, such as Commonwealth and Chapman.

Chicanes may also be used to reduce speed by reducing the width of the street. Chicanes up to 40 feet long can include attractive landscaping. But they also remove on street parking which is already at a deficit in this older neighborhood impacted by student parking from Fullerton College.

East Wilshire Avenue is a great candidate for a Bike Blvd and has been identified as such in Fullerton’s Bicycle Master Plan. It is a lovely tree lined street that is popular with cyclists. Nearby there are schools, the main post office, the transit station, and downtown.

If the bike boulevard is to be successful, it must meet the needs of both cyclists and residents who live on and around East Wilshire. On February 4, IBI invited the residents to attend a presentation where IBI answered questions and received feedback on the proposed options. There were 2 sessions at the Wilshire Auditorium with about 30 people total in attendance. The most often raised concern was the possible loss of parking. Mark Miller, the traffic consultant for the City, recommended that residents apply for parking restrictions with permits for residents only.

IBI will be bringing their plan to Fullerton’s Bicycle Users Subcommittee and to the City Council in the spring before returning to the residents again. After the two week trial in the fall, the council will review IBI’s study in late 2015 or early 2016 to determine whether to move forward with permanent improvements to establish Fullerton’s first bicycle boulevard.

Bicyclists in Fullerton and north Orange County have been having a run of good news recently. First , the Puente Bike Path opened  as reported in the last issue of the Observer.

Cyclists and pedestrians celebrate at the ribbon cutting for the bridge over Puente creek.

This link provides a safe bicycling route from northern Fullerton and La Habra south into  central and eastern Fullerton.  Three Council members showed up for the ribbon cutting, including Don Bankhead who had voted against the project.  Don acknowledged that the City had done  a nice job in building the bridge and path. Also present were Pam Keller who had supported the project when she was on the Council; and two Council candidates, both on bicycles.

The  second item of good news  is that OCTA, under the leadership  (and aggressive prodding)  of Shawn Nelson, released its Fourth District Bikeways Strategywhich identifies continuous  routes in and between  cities in the Fourth Supervisorial District and surrounding areas.  This is the sort of leadership that OCTA should have been demonstrating, but until Supervisor Nelson 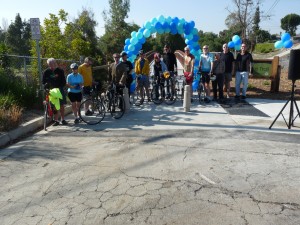 pushed they had resisted. The Strategy not only identifies routes but ranks them and gives them priority in OCTA funding. As a result,  in the next few years we should start seeing  more and more useful bicycle routes in the area.

A third item is that Fullerton has been designated by OCTA as the priority site for a bike-sharing program. This is a program — already in existence in many American and European cities — were riders can pick up a bike at one bike station and drop it off at another. It will be particularly useful for getting between the depot and the University and Fullerton College. There will be 10 stations through the city with 15 bike each in the beginning.

Fourth ( and fifth and sixth), the Council passed three items on March 20th, all of which have strong positive implications for bicycle riders. First, in discussing hiring a new design consultant for the State College grade separation at the BNSF tracks, if was promised by staff and the new engineer ( from Mark Thomas and Company) that room for a safe bicycle riding  would be provided in the  undercrossing.  This had not been promised before.  (I would be even more enthusiastic  were it not for the fact that this company  did not provide the same for the Placentia Avenue grade separation which it also designed).

The  Council  also approved  an application to submit bids for a “Community-based Bike and Pedestrian Mobility  Study”  to provide  safe routes across the 57 freeway between Chapman and Yorba Linda.  This could possibly result in a recommendation for a  pedestrian and bicycle bridge over the freeway. At the very least safer routes ( and there are no safe ones now) will be identified

Finally,  the Council approved seeking grants to build a “bike  boulevard” on Wilshire between Lemon and Acacia. This route is an important part  of a high priority route in the Fourth District Plan and is key to the success of the bike share program.  Somewhat misleadingly named, bike boulevards provide safe, comfortable  routes for bicycle riding by using a variety of traffic-calming measure to reduce the volume and speed of cars on residential streets. They benefit not only bicyclists but residents and pedestrians as well, largely by taking traffic off of residential streets and putting it on arterials, in this case Chapman and Commonwealth.

Perhaps even more important than all of the above actions is what it represents:  a sea change in the thinking of planners , engineers and other policy makers from the days when the principal  — perhaps the sole — goal was to get cars from Point A to Point B in the shortest amount of time. (The first “Purpose” listed in the Transportation Element of the 1980 Fullerton General Plan was to ” Reduce vehicular travel times between selected origin-destination points.”).

Now  serious effort is being made at all levels in OCTA and Fullerton and other cities to address the needs of bicyclists and to make our streets safer for bicycling and thus make bicycle commuting and recreation a real option. There is still a long way to go, but we have seen the first steps.