You don’t have to let careless or belligerent drivers get away with it.  For years the Department of Motor Vehicles has had a program to get bad drivers off the road. Click on this form to open a PDF you can fill out to start the process. 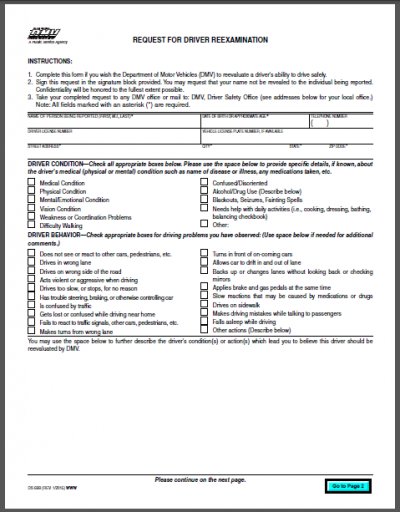 Intended primarily to report elderly, blind, or impaired drivers whose conditions have deteriorated to the point they may be a threat to others, this procedure causes the DMV contact the individual to prove they still qualify to be licensed to drive. Increasingly now, bicyclists are using this process to turn in hostile drivers, those who buzz-pass in violation of the 3-Foot Passing law, or make dangerous “right hook” or “left cross” turns which put them in jeopardy.

Rude, careless, and hostile often equals assault. Bicyclists are fully franchised users of the road. Motorists must respect your space, pass only when safe to do so, and at least show you the same courtesy they do other motorists.

Polite honks are one thing; long, drawn out horn use delivered at the last second or while sitting on your wheel is another. It’s pure intimidation, a threat delivered from a 4,000 lb. vehicle– it qualifies as “assault with a deadly weapon.”

But will it get results? Lawyers familiar with the DMV’s process say it will, eventually. A driver properly identified on the form will be contacted and informed their behavior on the road warrants an interview. The process is as anonymous as the DMV can keep it– your identity should not be revealed but the nature of your complaint will be.

“Acts violent or aggressive while driving,” “Fails to react to traffic signals, other cars, or pedestrians, etc.,”  “Turns in front of other cars [or bicycles].” When you check these boxes and add additional comments on the form you should get a DMV officer’s attention.

And multiple complaints filed on the same driver will have real impact.

The driver’s name is not essential. Contrary to the asterisk on the form, a complete license plate number and vehicle description can trigger the review process. If you post video evidence of hostile or reckless behavior on line, be sure to include a link on the form. That’s another reason to pack a GoPro or Fly6 camera.

The California Association of Bicycle Organizations and committees within Caltrans are examining the form and reporting process to make it more responsive to pedestrians and bicyclists. We’ll update this column as news becomes available.

Impressions expressed here are my own.

OCBC’s Mission is advocacy for all bicyclists. Federal and state trends have brought us to the brink of new highway designs driven by environmental concerns and administered by the new California State Transportation Agency (CalSTA). Reporting directly to the Governor’s office, agencies under CalSTA include the CHP, DMV, CalTrans, OTS, and others.

CalSTA has directed major change in CalTrans’ priorities. Active Transportation emphasis has resulted in new policies and goals, among them a tripling of bicycle use by 2020 (though by what metrics I’m not sure). Nevertheless, it’s an ambitious goal.

And so we come to Cycletracks, the focus of this meeting. For cycletracks, or Class 4 Bikeways, are intended and designed to attract Californians who do not today ride in any significant way. Debates about their efficacy are irrelevant at this point– agencies throughout the state are competing with each other to become “bike friendly” and this latest concept is now one of the “tools in our toolbox” (if I heard that term one more time during this meeting I was going to throw a wrench at the speaker).

Cl. 4 bikeways are largely unknown in California: there are no standards for where they are appropriate, no agreed upon geometric dimensions, no set behaviors for bicyclists using them. To fill this void Caltrans has been tasked with publishing a guide. And while the form this document or documents might take has not even been determined, the agency must publish their guide by the end of 2015.

Usually the mucky-mucks at Caltrans would huddle with their consultants, draft their guide– typically in or a bulletin supplementing the Highway Design Manual and Manual on Uniform Traffic Control Devices– and put it out for those who build the roads to use. And those of us who use the roads they build would comment after the fact.

But someone at Caltrans realized that maybe when it comes to bicycle transportation “we” among the masses know more about the subject than they do. So they turned this process on its head, and summoned bicyclists, advocates, public works professionals, some CHP, planners, and consultants to sit down at the beginning of the process. And so we did.

Conclusions
There were none. This was an initial input process, to be digested by Caltrans Headquarters staff. And there was a lot to digest.

First, the Class 4 concept is much more complicated and costly than almost everyone assumed going in. And the anticipated end user challenges of intersection navigation only scratch the surface. The real safety concerns for the majority of those users– neophytes, untrained, undisciplined bicyclists– is a responsibility fraught with liability.

Those of us whose first concern was protection of cyclists’ right to the street stressed that cycletracks must not be mandatory and must not look mandatory. For instance, we stated that where a Cl. 4 is to be installed on a street with existing Cl. 2, that Bike Lane must remain next to the travel lane. If installed on a street with sharrows, the sharrows should remain.

Maintenance of point A to B efficiency should require that bicycle movement outside the cycletrack remain unimpeded. Bicycle signal faces should control only bicyclists within the cycletrack, not those using the roadway outside.

And maintenance of the pavement itself was a frequently discussed concern. As was ADA and pedestrian access across that pavement. Passenger side dooring. Delivery truck parking. Signage, marking, and behavior at unsignalized intersections.

Capital cost, time required to install, and the cost of correcting errors in design or installation was cited more than once, with the offered solution the ability to temporarily install with movable barriers, signs, and paint. This often led to the need for a clear means to experiment by local agencies and the need for liability immunity.

Fuzzy Language
Despite these concerns cycletrack advocates remain determined to push projects ahead, insisting on “flexible standards,” an obvious oxymoron. Fuzzy language was a consistent challenge at the meeting– Caltrans staffers were assigned to “captain” each table and get key ideas out of each discussion group and up onto flip charts. I’d rate their performance at 75%.

Facilitators handed out a Glossary of Terms to bring consistency into our discussions. Highlight of the day came early when Jim Baross pointed out that the name of these facilities, by statute, was “separated bikeways.” Every page in the Glossary referred to them as “separated bike lanes.”

A draft guidance is likely to be circulated before the final document. Whether the final emerges as a separate work, or is incorporated in the Highway Design Manual was not determined.

Personal Opinions
E-bike sales and the power of the free market will do more to put butts on bike seats than Class 4 bikeways. That point was almost completely ignored yesterday. But our roadways will look different in 10 years and the role pedal-only bicycles will play is uncertain.

The cost and complication, not to mention political climate of individual cities, will limit cycletrack installations, probably to city cores and select major arterials.

The words “culture” and “cultural change” popped up several times yesterday. It’s amazing that calls for education and communication came up so seldom.

We’re supposed to be notified by Caltrans in San Diego when the base is closed. But we’ve had no official warning– just disgruntled and tired bicyclists returning against our current 20+mph winds. Marine guards are stopping all bicycle traffic at the extreme southern end of San Mateo St. Park, telling them to turn around.

While awaiting word from Caltrans District 11 that it’s officially OK to ride the freeway south of San Clemente, all we can say is, if you have to get to Oceanside, get on at the Basilone on-ramp south of Trestles Beach and pray CHP doesn’t see you.

Stacy Kline, OCBC Board Member, was riding a few miles behind Matthew O’Neill when he was killed on Foxen Canyon Rd. The motorist, the 16 year old son of former Lt. Governor, Abel Maldonado,  failed to yield when overtaking Matthew on an open stretch of  a quiet, rural highway. Immediately following Matthew’s death, a campaign was started to explain to motorists why they should change lanes when passing a cyclist, and to amend the “Three Feet for Safety Act” to allow motorists to cross a solid yellow center line to pass a cyclist.

The preliminary hearing for the motorist who killed Matthew was held this past Friday. The case is in juvenile court which has different procedures than an adult criminal proceeding. On their way home to San Diego after the hearing, I spoke with Matthew’s parents about the case, and they mentioned that the court is now accepting Victim Impact Statements.

To help the O’Neill family, it is important that the probation department receive as many Victim Impact Statements as possible, and as soon as possible, describing the impact Matthew O’Neill had on the lives of others. Letters are needed that describe Matthew’s cycling passion, concern for the success of other cyclists, contributions to the randonneuring community, continued quest for knowledge, love of lifelong learning, advocacy for those who could not advocate for themselves, and, above all, Matthew’s commitment to live life in the service of others.

Please email your letters to Terri Zuniga, the supervisor of the Victim Witness Program. Terri will deliver the emails to the probation department on Matthew’s behalf.

Terri Zuniga
Victim Witness Program Supervisor
tzuniga (at) co.santa-barbara.ca.usThis is the first step in changing the narrative about what it means to be a motorist. Real enforcement and meaningful penalties can make a real difference in making the roads safer for all road users, especially the most vulnerable, reflecting the essence of Matthew’s life work.
Best regards,
Stacy