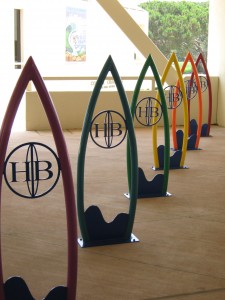 December, 2010 – Police in Huntington Beach have received counseling from League Certified Instructor,  Jim Powers. A tireless worker for cyclist rights and education, Jim won the trust of the Chief and training officers to become the first qualified cyclist to present credible accident stats and their implication for equitable law enforcement to HB’s Finest.

Among the many projects was creation of the public/city bicycle organization, Huntington Beach Bicycle Advocates. HuBBA gives YOU a means to stay involved with bicycle decisions that affect your town: http://www.hubbabikenews.blogspot.com .

July 17 – Bicycle Friendly Community application has been submitted to the League of American Bicyclists. Resident bicyclist and cycling instructor, Jim Powers, reports the detail required in the survey was massive but he’s confident LAB approval.

Says Dan Hazard, one of HuBBA’s founders, “HuBBA seek a broad representation of individual and family bicyclists who live in or ride in Huntington Beach including street riders, bicycle path riders, dirt trail/mountain bicycle riders, and beach cruisers. We envision infrequent meetings only as needed and will rely primarily on email communication.”

HuBBA will meet Wednesday, July 21, 6PM, at Chili’s in the Charter Center, Beach and Warner.

June 14 – City Hall New surfboard bicycle rack display blends function with artistic flair and adds a vibrant touch of color to the Civic Center Plaza landscape. The bicycle racks are a Surf Air Commute Choices project designed to encourage bicycle transportation, part of the city’s effort to be recognized as a Bicycle Friendly Community by the League of American Bicyclists.

The racks represent Surf City’s bicycle friendly theme by joining beach, board, and bicycle. Their installation was at the request of city employees and residents for permanent bicycle racks at the Civic Center. The distinctive Surf City bicycle racks were the conceptual vision of the City Rideshare Coordinator, Noreen Swiontek. Senior Engineering Technician, Eric Powell, was enlisted for his creative design skills to capture her abstract idea on paper as a custom surfboard feature. The collaborative efforts of several city department staff members were essential to supporting the development and implementation of the project. 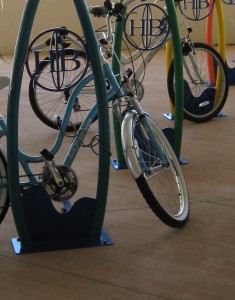 Bike Sculpture – modern racks provide real security without bending wheels or scratching paint. Cyclists park next to or lean bikes against it as they wish. Don’t forget your lock!

On your next visit to the Civic Center, consider bicycling and choose your favorite color surfboard to park alongside.

Huntington Beach is the birthplace of OCBC, and we’re delighted with the city’s new commitment to cycling.

Coalition founder, Don Harvey, tells the story. “OCBC was formed in 1991, when Caltrans decided to remove the bike lanes on PCH in Huntington Beach and stripe in a third traffic lane each way, for 6 traffic lanes on an existing roadway of limited width, requiring substandard-width lanes.

“I was a long-time bike commuter on PCH, having ridden daily since 1979 from my home in Newport Beach to my job as an engineer at McDonnell Douglas (MDC, now Boeing).I and another MDC engineer– Mike Mott, now an IBM Fellow– took it on ourselves to organize cyclists to save the bike lanes. Caltrans held public meetings to explain their case and were surprised when lots of bicyclists showed up.In the event, OCBC was formed and the plan to eliminate the bike lanes died.

“For road-averse bicyclists, the city completed the shared-use trail that parallels PCH from Warner to the Santa Ana River.

“The city realized the depth of public support for bicycling, and ever since has been a reliable source of friendly support for bicycling— a lucky thing, because riding along the Pacific in Huntington Beach, either on PCH or on the beach trail, is a world-class pleasure.”

The city has just applied for Bicycle Friendly designation by the League of American Bicyclists. The Bicycle Friendly program has been very successful for LAB, enrolling cities around the country, exposing them to the needs of bike users, and rewarding those that work to meet those needs.

How bicycle friendly is Huntington Beach? You tell us, OK?

PCH through HB with the “bike trail” in the background.