Members of the Orange County Bicycle Coalition contact city staff members almost every day in an effort to improve bicycling and other active transportation throughout Orange County. Here are some recent examples:

San Clemente pushed past another obstacle to Complete Streets implementation last night when City Council voted 3:2 to repave and restripe Vaquero, a 56′ wide connector currently featuring a 12′ painted median residents had insisted provided a necessary refuge from speeding traffic which plagues their neighborhood.

The median was installed at resident pleading by a previous traffic engineer; rather than slow down speeding traffic it pushed motorists toward the right hand edge where a substandard bike lane forced cyclists into the travel lane at every parked car.

The median was a “warm blanket” for residents who emotionally defended it at the meeting. Councilmen Chris Hamm and Jim Evert led the majority toward sanity with Mayor Tim Brown swinging the vote. We’ve more work to do convincing citizens and electeds that 99% motorist mode share does NOT mean 99% of the consideration must go to cars. That ain’t Complete Streets.

Elimination of the median– which served primarily as a convenient place for residents to turn left into their driveways– allows for buffered bike lanes, narrowed travel lanes, and still allows plenty of on-street parking neighbors wanted. Left turn pockets at critical intersections will remain in a final plan. 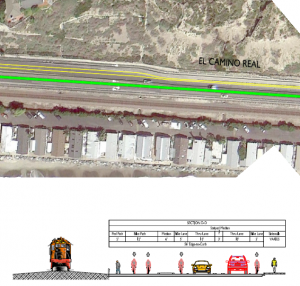 Old Hwy 101,a.k.a. Pacific Coast Highway, was turned over to the city by Caltrans after the I-5 freeway was built. Called El Camino Real, it has languished as a 4-lane, then 3-lane, and now down to to 2-lane  arterial. Over the years it’s had bike lanes of various widths and sidewalks some places. But always motorists have treated it like a full speed alternative to the freeway.

In a year or so that will end. A model Complete Street rebuilding will add a Class 1 Bike Way– that is, a multi-user paved path– to the ocean side of the road, and extend a sidewalk the full length on the inland side. The travel lanes, reduced to 10 feet in width, will slow motor traffic and Class 2 Bike Lanes from 5 to 8 feet wide will run both ways.

The multi-use trail is essential because San Clemente’s popular Beach Trail attracts many times the pedestrian and casual bicycle traffic that was expected. And most of the thousands of users expect a similar amenity to connect to Dana Point. Runners, sight-seers, stroller pushers, beach cruisers, and family bikers all want a trail separated from motor traffic. The city expects high volumes on the new trail, especially on weekends, holidays, and busy summer afternoons.

Class 2 Bike Lanes are intended to attract higher speed cyclists, singly or in peletons, which are the single largest non-motorized group on El Camino Real today.

Funding was achieved through a combination of Federal and State monies and the design phase has take a year. The effort has been sheperded by the city’s Traffic Planning Manager, Tom Frank with copious input from Pedal’s Brenda Miller, and local bicycle advocates including OCBC Director, Pete van Nuys.

From our neighbors waaaay up north in Canada, we found a University of British Columbia study of “Bicyclists’ Injuries and the Cycling Environment”  which examined the risk of injury associated with cycle routes.

Published in the American Journal of Public Health, the study quantifies the intuitive belief that bike riders are safest away from other traffic.

The highest risk route was major streets with parked cars and no bike infrastructure.

An excerpt in comparing risk of injury while riding a bike:

“In comparison, the following route types had lower risks (starting with the safest route type):

For off street – bike only paths (for bikes only – no strollers, runners, dog walkers, etc.) 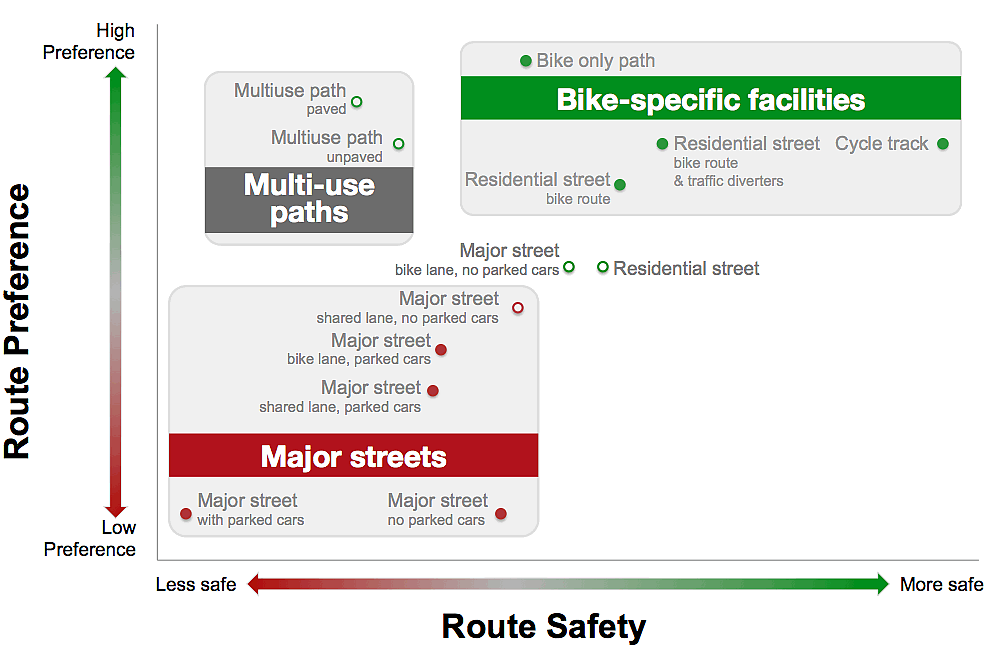 This diagram shows as bike infrastructure is separated from vehicular traffic, the risk of injury decreases, while the appeal of the route to cyclists increases.
Image: IBikeTO

Now a cycle track running the length of the county down the coast would be great, but we think we have a less costly approach which has most of the benefits, without the associated high cost of construction and ongoing maintenance.

Buffered bike lanes could be implemented fairly quickly if some localities are willing to find some space for cars to park other than the roadway.

They also could be incorporated into the design of the new developments in construction and in the planning phases throughout the county.

Seal, Sunset, and Huntington Beach are likely candidates as are Newport and Laguna Beach for the coastal portion of our BikeBone.

Coupled with roundabouts (and mini-roundabouts) at targeted intersections, driving and riding up and down the Coast Highway would become much safer for people on the roadway as well as pedestrians trying to cross it.

In January 2012, Caltrans  implemented buffered bike lanes by removing 2 travel lanes on Sloat Blvd. (CA-35) in San Fransisco. Driven by a request from District 4 Supervisor Carmen Chu to improve safety on this roadway, this is what they came up with: 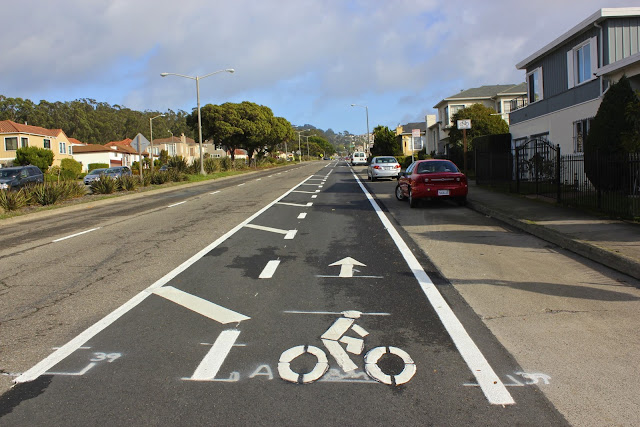 With a little paint and reclaimed space, Orange County could (and should) transform a high death / high injury roadway into a much safer and saner travel experience.

Los Angeles county introduces sharrows for the downhill and a bike lane for climbing in an innovative approach to rider safety in Santa Monica, March 2012

The approach used above provides some measure of safety for riders going uphill by providing them space out of the traffic lane, while riders descending have sharrows to guide their way clear of the door zone in Santa Monica on Arizona Avenue.

The approach below shows the buffer of a buffered bike lane placed in the “door zone”.
(Photos by Gary Kavanagh)

Being 2nd in the state (behind Los Angeles) for cyclist injury and death is not something to be proud of, nor something that should be accepted as “coming with the territory”.

As seen in the above two pictures, Los Angeles County is applying low cost (paint) methods (a variety of appropriate designs) to improve both the connectivity of bike-able streets, and the safety of its riding public.

Despite numerous projects to increase vehicular traffic flow, scant attention seems to be made in this county regarding safer infrastructure for the riding public; the latest affront being the temporary loss of the northbound cycle lane on PCH before Warner without any advance notice or warning to advocacy groups.

It “only” took over two years, two deaths, a threat of (yet another) lawsuit, and the turnout of hundreds to catch the attention of one city to take action in the form of putting some paint on the road to improve cyclist safety.

Given the number of riders observed preferring the door zone to the clear direction provided by the recently installed sharrows, we provide the instructive graphic on the left.

Sharrows are positioned on the road to provide guidance to bike riders as to where to position their bikes as they make their way down the road.

Two rules apply:1) ride with the direction of traffic, (2) ride between the stencil’s wheels and through the center of the chevrons.

As the county continues developing its last open spaces creating greater demand on the roadways, proactive planning for active means of transport should take the forefront, and not be an afterthought after the last strip of pavement is laid.

As the study points out, infrastructure plays a key role in attracting and motivating more people to cycle, in addition to increasing their safety while doing so. As we continue collecting your input on our Bike Commute Survey, it’s clear a dedicated cycle route free from non-cycling entities is highly desired.

Using the study’s observations and conclusions, City, County, and Caltrans planners can design safer means of roadway treatments to accommodate all users of the roadway regardless of how many wheels those users may have under them.