Quick, can you name the most dangerous roads in the OC?

To qualify, the road must have at least 1 bike related collision in the last 11 years.

Thanks to the blocked bike lane last month (surprise!) on northbound PCH before Warner, and the fact that the k-rails were still there this week after work was completed, we thought we’d take a look at roads and bike collisions in the OC. to see if perception matched reality.

Since CalTrans failed to notify the cycling community before the lane closure, and failed to remove the barriers in a timely fashion, we could wail about the injustice of it all, but we won’t.

We also wonder what else is going on about the county putting bike riders at risk. If you see something, send us a short note (anonymous if you’d like), and we’ll follow up on your tip. Thanks!

The current contenders in the Danger Road category are: 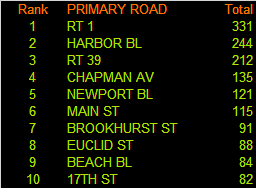 As seen, RT 1, or the Pacific Coast Highway leads the contenders so far at 331 bike related collisions.

We are only counting collisions without regard to death or injury at this point; an aggregate total count if you will.

The road travelers among you know some of these roads go through many cities, and some might even change names as they do.

Care to guess? Have a favorite? Let us know your choice for top “Danger Road”, winner gets to ride it at their own risk. When we open the envelope with the winner, we’ll either update this post or create a new one. 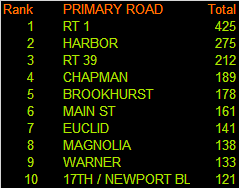 A tie for 10th place at 121 collisions as 17th street moves up to equal the number of collisions on Newport Blvd.

The overall “winner” at 425 collisions is RT 1, aka Coast Hwy, PCH, W Coast Hwy, E Coast Hwy, Pac Cst, and all the other names for this road in the database.

Yes, we went through line by line for all the roads including Brkhrst, Brookherst, and all the others to arrive at this list.

With 150 more collisions than any other road, PCH (or RT 1) travels the length of the county, so perhaps it shouldn’t come as a surprise given ridership, traffic, and the probabilities inherent in the mixing the two.

What’s interesting is the distribution of collisions along the road as seen here:

Newport Beach is clearly above all others and not in a good way which is one of the reasons we support local efforts to improve cyclist safety in this city.

We’ve documented (and mapped) plenty of Newport related items and issues which you may find here.

We also thank all those that turned out for the NPB Memorial Ride and Fundraiser last October.

With 9 riders killed and 442 injured from the above 425 collisions, the chart below attempts to discern any seasonal effect in collisions. 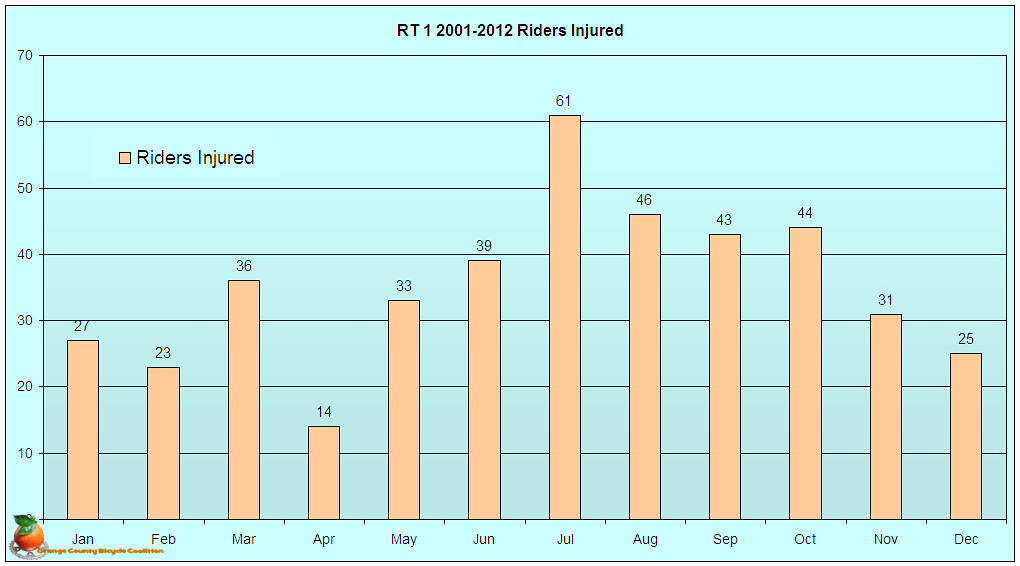 One would expect greater numbers of riders in the summer months, and the chart shows the highest injuries happening in July and decreasing into the winter. The high count in March may be weather related due to unexpected rain and road conditions.

Collisions and injuries are not a 1:1 proposition. Sometimes there are more than one person injured in a collision and sometimes no injury is reported from a collision, hence the difference in numbers between collision and injury counts.

The complete breakdown looks like: 462 total injuries from 425 collisions involving people on bikes.

442 bike riders, 6 motorcyclists, 3 pedestrians, and 11 drivers were  injured during this reporting period ending the 3rd quarter of 2012 with the most recent entry to the CHP database dated 7/28/12.

Nine bike riders are dead as a result of collisions with no other fatalities recorded for other road users.

With your continued support, we aim to identify, notify, and assist in reducing ridership collisions.

We’ve presented charts and figures for counties and cities regarding collisions with bike riders showing the counts of fatalities and injuries, (in Newport’s case even the degree of injury), and who was at fault for the collision yet there’s still something missing.

To better target our educational outreach, we need to know “who are these people”, or who these people are that are colliding or are being collided with on our roadways.

The overview results are surprising and interesting, so we thought we’d share some top level charts for the county: 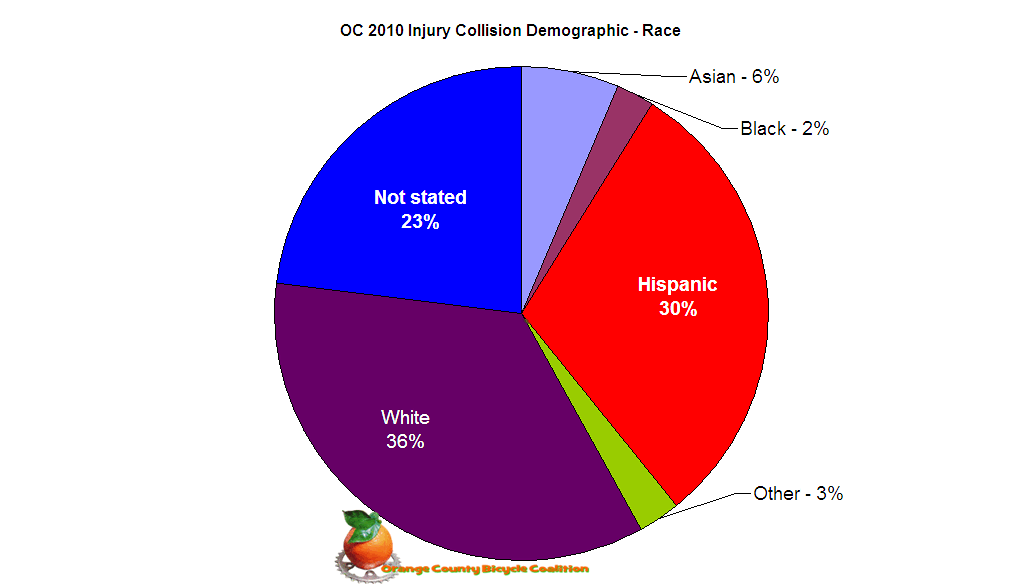 The classifications for race are assigned in the collision record database, and the 23% being “not stated” may indicate shoddy record keeping by the reporting agency in 2010. 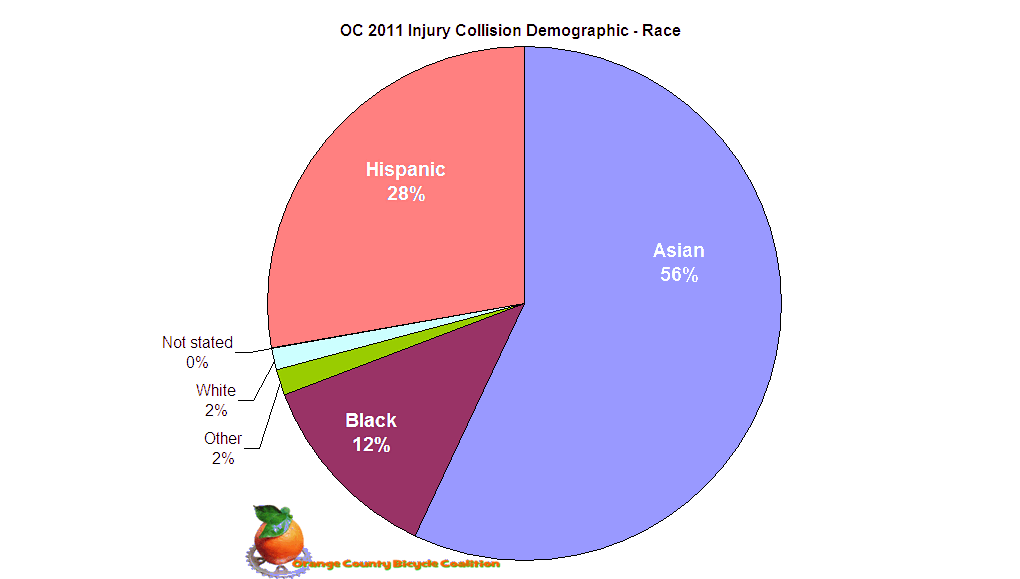 In 2011 record keeping improved in the county, shrinking the “not stated” to a negligible number (9). While it would appear that Whites either quit riding their bikes and causing collisions, or previous educational efforts are bearing fruit, we suspect more of the latter than the former.

Obviously the largest jump in colliding riders are the ones identifying with the Black and Asian categories, with a slight decrease in the Hispanic and Other categories.

So far for 2012 there aren’t too many records from Orange County with demographic information. As noted in an earlier post, some PDs are better at taking care of “administrivia” than others in getting their paperwork submitted in a timely manner. We also found that collision demographic data lags the actual collision record submission such that there may be a collision record with 2 parties injured, yet the party record is not there!

Such is the risk and result when working with preliminary data, so until the county demographic records show up, we present the 2012 collision demographic for the state: 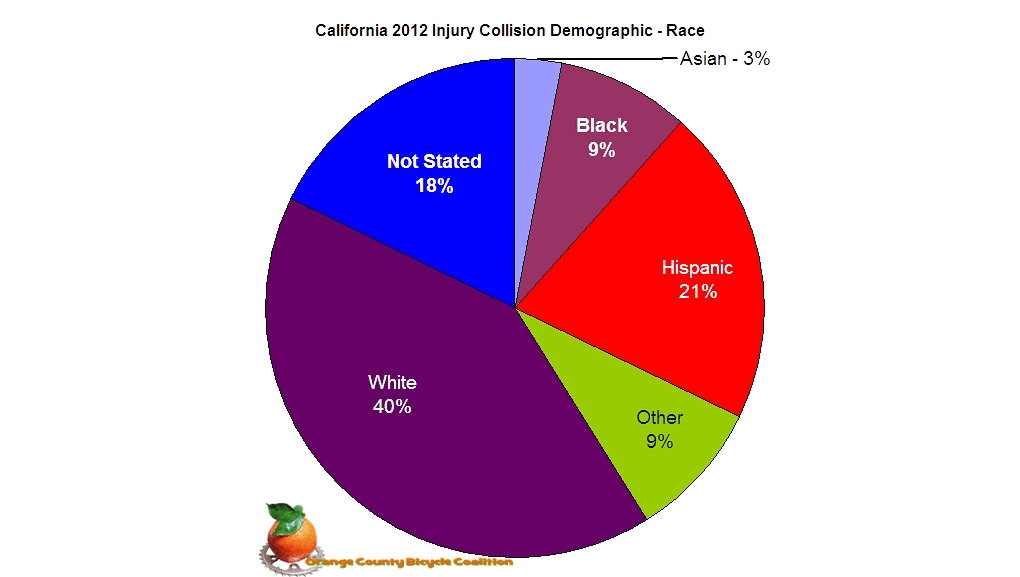 This might be something you’d expect to see from a state wide coalition like the CBC or even CABO, and while we can, it’s far beyond our charter to do so and this was done just to see if we could.

Since you asked, yes we have the city by city breakdown for the county, and they will be contacted regarding educational outreach efforts. On the other hand they are always free to contact us!

And since you’re wondering where this all came from…

All collision records are collected and maintained by the CHP SWITRS (Statewide Integrated Traffic Records System) database. There are actually 3 parts to the complete information record: collision, party, and victim. The record caseid (a unique identifier) is what ties the 3 segments together and we created a way to allow party information to be tabulated by any criteria we choose within the items contained in the database.

The process is time consuming and a lot of checks and balances are built in to avoid record duplication or omission, however that is part of the value-add provided by the Orange County Bicycle Coalition.

Your membership and donations help fund this effort, thanks for your support!

As one of 83 cycling events in 43 states for diabetes, join over 250 riders as the OC Tour de Cure takes place this Saturday 9/29/12 in Aliso Viejo and Laguna Niguel. The fundraiser supports nearly 26 million Americans with diabetes through the American Diabetes Association.

There are 3 road and mountain routes to choose from, or bring both bikes and ride one of each! A bike corral will hold your extra bike while you are out riding.

You may sponsor a rider, or make a direct donation to the event from the website.

Please be aware, and respect others on the trails, paths, and roads.

Thanks for your great support!