Sept. 17,2012 – Special meeting of the Newport Beach Citizens Bicycle Safety Committee  at 4:30 pm at the Central Library on Avocado.

Until the end of October, the OC Sanitation District will be poking around the area in preparation for a 2014 project, so you may experience some lane closures. We have been assured that detours are not necessary as the work is not extensive and will “take place at various hours during the day and night” to minimize traffic and maximize safety. If the assurances and reality should prove otherwise, blow the whistle on it, or call the OCSD’s construction hotline at 714-378-2965. Pictures are very helpful!  The actual project may require some reroutes in 2014 – but we’ll work that out with the OCSD well ahead of time and let you know here.

March 14, 2012 – Police to Target Bike Violators Mar. 17 & 24 The Newport Beach Police Department will be conducting a specialized Bicycle Safety Operation on March 17th and 24th, 2012. Extra officers will be on duty patrolling areas frequented by bicyclists, pedestrians and vehicles. Officers will be addressing traffic violations made by all vehicle operators, bicyclists, and other vehicle drivers that lead to vehicle, bicycle and pedestrian collisions.
h/t bikenewportbeach.

Sharrows, introduced last fall along Bayside Drive, will appear this year on Pacific Coast Highway. This is a first for any city in Southern California. Underway, too, is a review of all bicycle accident data with an eye toward the root cause of traffic conflicts. These efforts reflect an enlightened attitude toward the future of cycling in Newport Beach, moving this city among the leaders in the county. 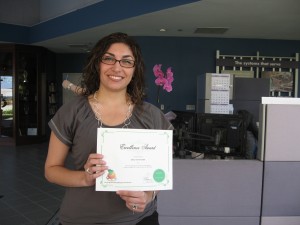 Meanwhile, major construction and repair by OC Sanitation District along Pacific Coast Highway will be diverting traffic for months. The site is along a particularly congested section known as “mariner’s mile,” where even without the construction all vehicles northbound from Dover merge from three lanes to two. When the barricades went up cyclists were forced into the already congested right hand lane.

OCBC Director, Michelle Kashima, contacted Sanitation District employee, Daisy Covarrubias, to inform the agency about the site design which put bicyclists at increased risk. Rather than excuse the layout as an unavoidable result of a needed project, Daisy worked with traffic engineers in Sanitation and the city of Newport Beach to give cyclists a few feet to ride. It took three design submittals to Caltrans– in charge of all work on state highways– to configure a usable bike lane.

“We know a lot of bicyclists use PCH and we’re concerned about their safety,” said Daisy. “The city of Newport Beach cared, too.”

For her perseverance on behalf of bike safety in Orange County, OCBC presented Daisy Covarrubias our Excellence Award.