Amgen Tour of California
Miles: 78.3 KM: 126.0
If the Stage 6 climb to Big Bear Lake created some separation between the contenders and the chasers, Stage 7 of the Amgen Tour of California will be the ultimate test of the rider’s resolve to capture the Amgen Leader Jersey. Did they leave it all on the roads to the Big Bear Climb, or did they hold back enough to survive one of the most difficult stages in the history of bicycle racing in the United States?

It’s been called the “Queen’s Stage” and compared to the epic stages of the European Grand Tours – a return to the mountain top finish that thrilled so many during Stage 7 of the 2011 race.  This is the training ground for many of the local racers in southern California, but only a handful have done the entire route, and none have done it after six days of racing more than 750 miles.

This will be the stage where legends are made and winners are decided. 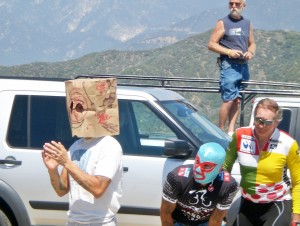 The unknown spectator at KOM2 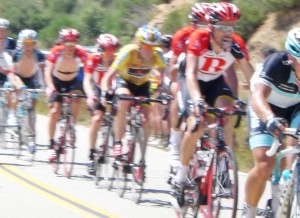 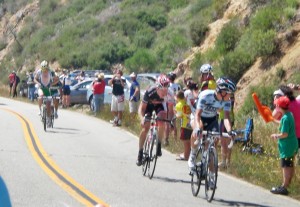 Distraction on the course. Who's #1?